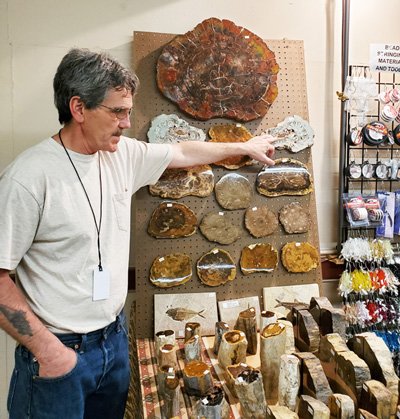 For the Love of Rocks

IMPERIAL — World renowned paleobotanist Ed Rigel has been a vendor at the California Mid-Winter Fair & Fiesta sharing rare and unique gem and mineral specimens for 10 years. Rigel’s father frequented the fair in the same manner for 25 years before him.

Rigel’s business is Applegate Lapidary and describing how he makes a living, Rigel said, “Lapidary is a Latin word meaning the cutting and polishing of stone.”

The Applegate Lapidary booth inside the Gem and Mineral Building at the fair was filled will a plethora of gem and mineral specimens from all over the world, and even outside of it. Several meteorite specimens were on display and for sale.

Rigel lives in the small gold-mining-era town of Volcano, Calif.

“Back in its heyday in the 1840s, Volcano had a population of 17,000 people, which at the time was more than Sacramento,” Rigel said, sharing a bit of history of his home town.

Volcano is near Sutter’s Mill, the location that sparked the California gold rush. After the initial discovery of gold in 1848 about 300,000 migrated to California from all over the country and the world.

Because it had the closest gold stamping mill to Sutter’s Mill, the town of Volcano maintained a solid foothold in the California gold boom industry.

Nowadays, Rigel explained he does not search for gold. His specialty is ancient plant fossils.

“We have a 950-acre paddock in Queensland, Australia. We get tons of common petrified wood and conifer species but what we are really after is the Triassic and older ferns that come out of there,” he said.

Rigel’s site has produced two of the rarest and largest ferns ever found in Australia. His most recent groundbreaking discovery was a psaronius fern, the first of its type ever discovered in Australia.

Throughout his career, Rigel discovered several ancient species of plants and he  shared a story about a pair of discoveries in the late ‘90s made in Zimbabwe and Madagascar that helped prove the continental drift theory.

“One of my workers in Zimbabwe, his name is Bacari, found an ugly piece of rock. I told him to get rid of it,” he said. “Bacari put it on the truck, took it back to our shop and grinded off one end of it so I could see the pattern. When he showed it to me, I couldn’t believe what I was looking at.”

Rigel said he did not know exactly what they had discovered but he knew it was something new. After having a good laugh with his employee, Rigel made a 400-mile return trip to the site of the discovery and found 11 more petrified pieces of the tree.

Rigel brought the sample back to the states and was eventually able to identify the specimen as being a member of the araucarioxylon family, an extinct species of conifer commonly found in Utah not Zimbabwe.

A few years later, after publishing in papers in scientific journals about the find, Rigel happened into another important discovery.

“An importer/exporter from Madagascar had this ugly chunk of rock which I ended up buying for $700,” he said.

Rigel took the large potato-shaped rock home and after making the first cut, could not identify the species of plant he was looking at.

“The leading paleobotanist in the country took one look at it, made tracings and matched it up to the araucarioxylon from Africa,” he said.

The existence of two specimens of the same species of fern from Madagascar and Zimbabwe help prove the continental drift theory, Rigel added.

“The old theories were that birds would eat a seed and deposit it. There is too much distance between these countries for that to be the case. The discovery proved that Madagascar was once a part of Africa,” he said.

To give perspective, the two largest rock saws in the Gem and Mineral Building used for cutting geodes are only 18 inches.

Rigel shared some invaluable advice for anyone interested in getting into rockhounding and/or the lapidary arts. “The best thing to do is to come to the Imperial Valley Gem and Mineral Society and start talking to some of these folks. Their knowledge and willingness to teach is the best place to start,” he explained. 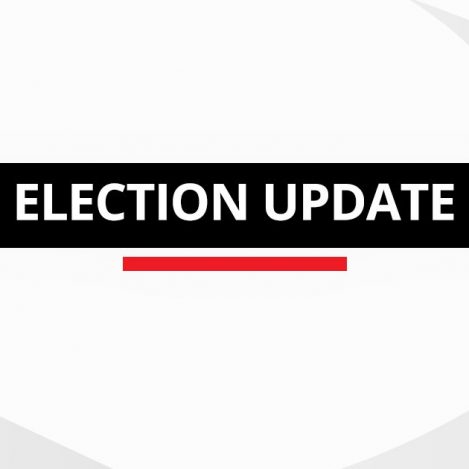