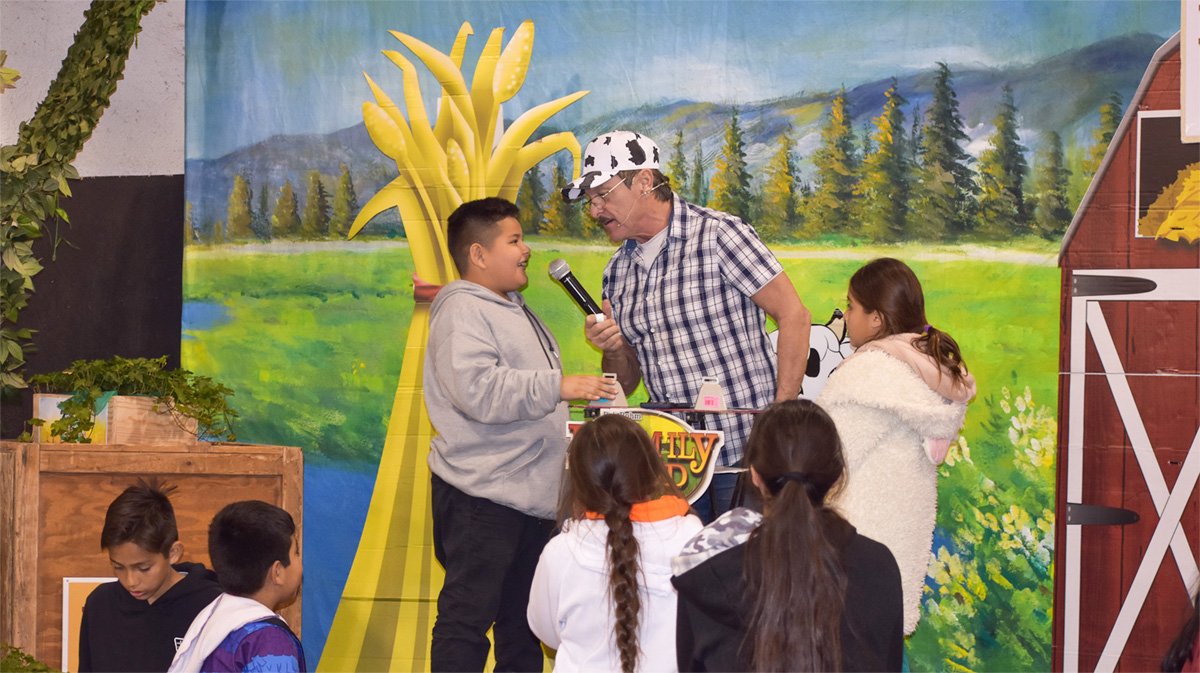 IMPERIAL — In the Doc’s Pavilion agriculture-themed building at the Mid-Winter Fair & Fiesta the Farmily Feud comedy game show was about to begin and creator Bob Bohm had a few surprises for his audience.

“The game is just like Family Feud–two teams but the questions are about farming and agriculture,” he explained in an interview between shows. “After the Q&A, leads to the silly games portion which include cow-pie tossing, pin the tail on the cow and milk the cow. The whole game lasts about 20 minutes because that is about the average attention span for kids.”

Hailing from Wisconsin, Bohm has traveled to fairs all over the country hosting  Farmily Feud.

When asked how he programs his work, he said, “It’s all marketing and advertising and letting people know I am available for fairs. I am also a magician and hope to do magic shows as well in the future.”

Anxiously waiting for the game show to start, Glenda Humble and her two sons, Dorian Robbins, 6, and Davian Robbins, 5, were enjoying the fair’s delicious popcorn and fries.  Bohm was kind enough to give the two boys an introduction on how the game works, though Davian was more interested in ringing the cow bell.

When asked if they had been on a farm before, Dorian and Davian said they only went on a local field trip.

For this performance Bohm had two teams–boys against girls. The kids who had been anxiously waiting ran up to their respective sides. A white farm fence with a pink scarf set the stage for the girls while another fence with a blue scarf was for the boys. Then the questions began, Bohm pitting the boys against the girls.

Bohm picked up a card and asked the first question, “Name something you get from a cow.”

The boys’ team answered, “milk” and more answers followed with “cheese” and “butter.”

However, the girls responded to next question, ‘What is a farm animal that lays eggs?”  They started off with “chicken,” then “duck,” and then got stuck and Bohm started a countdown, “5, 4, 3, 2, 1. I was looking for a goose, a turkey, etc.”

As the game neared its end, Bohm announced the score as girls 14, boys 8. He started another set of questions but with 2 points each to give the boys a chance to catch up.

When asked to name something from a farm that we drink, one of the boys answered “water.” That was wrong and when a girl answered “milk,” her team won that portion of the game. The boys each received a ribbon for their participation.

“Now to determine among the girls team who would be the number one farmer, a couple of jobs need to be done around the farm,” said Bohm.

Other games ensued, including “pin the tail on the cow” blindfolded while the audience yelled to the left, to the right, up, down.

Two finalists went on to milk the cow. A device representing real cow udders was rolled behind the cow prop. Each girl was to milk the cow squeezing the udders to get the milk out. The contestants were Kiana Adame and Christine Layaye, the latter winning by filling her container almost to the top.

The session ended with all kids getting a turn to milk the “cow.”

Bohm then urged the children to put their new-found knowledge to immediate work saying, “If you go around to the posters set up throughout the building, you will know the answers to my questions.” When asked what was the best part of the game, Emmi Escalera quipped, “I enjoyed beating the boys.”

Previous
For the Love of Rocks 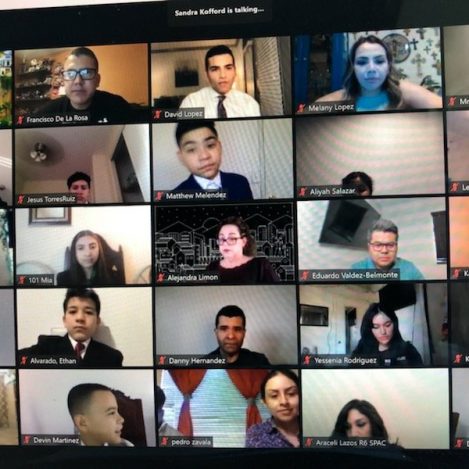