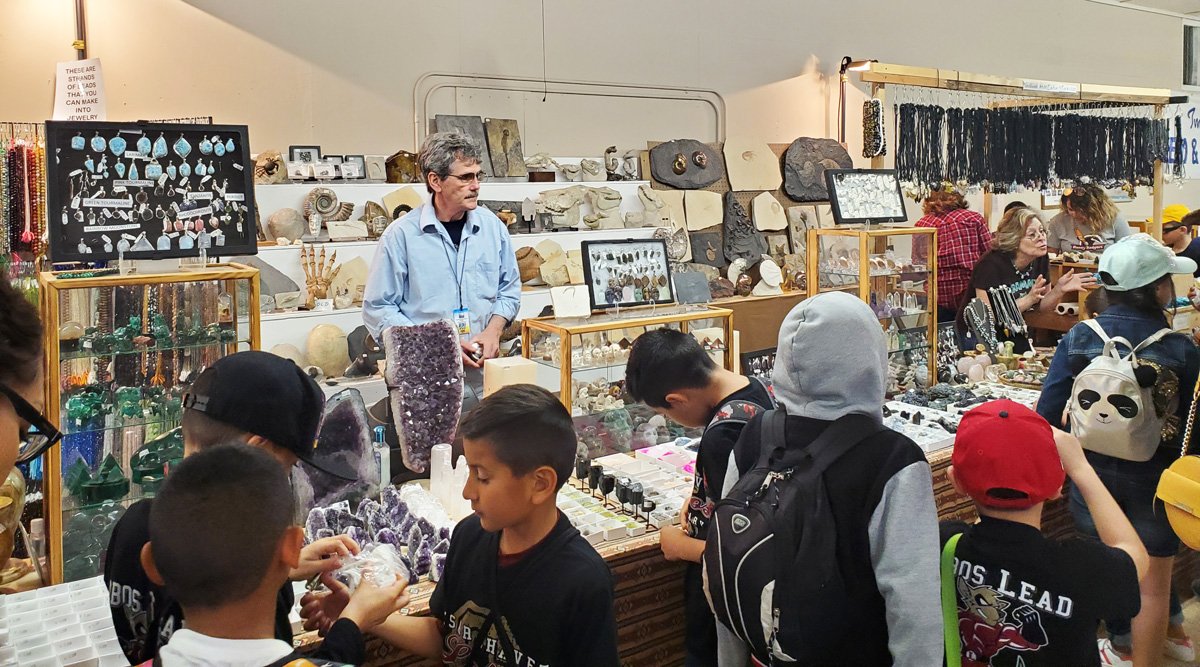 The I.V. Gem and Mineral Building is crowded during the Mid-Winter Fair & Fiesta in Imperial. Some commercial vendors said fears of the COVID-19 virus may have dampened sales. | Jayson Barniske photo
Home
COVID-19
In COVID-19Regional News

IMPERIAL — A constant companion for many in attendance at this year’s California Mid-Winter Fair & Fiesta were thoughts and fear of the surrounding dangers of the COVID-19, or coronavirus. Children could be seen wearing face masks and hand sanitizer became a hot commodity.

Vendors were quick to deny fear of COVID-19 hurt sales, but after pondering the subject everyone interviewed agreed recent media reports had a negative impact on sales to varying degrees.

Bobby Kapoor of Brawley, an annual vendor at the fair, initially said, “The coronavirus didn’t affect my sales much, but sales were down.”

After more thought on the subject Kapoor continued, “I think fear of the coronavirus did affect my sales. The wind only closed the fair one day, but I noticed the larger indoor buildings seemed empty. Inside the Preble Building people are not here. Indoor spaces scare them.”

Kapoor added he recognized changes in his own tendencies regarding fear of the virus.

“I have found myself on edge about people coughing. The person in the booth next to me was coughing and I admit I was a little worried,” he said.

In the world of sales, a widely held belief maintains scared customers are much less likely to pull out their wallets.

James Egger, vice president of the I.V. Gem and Mineral Club. spoke about sales in the group’s fair building.

“A good day for us is 80 geodes (sold). Today is the last day of the fair and we only cut 50 geodes. The fair being closed on Sunday (March 1) from wind really hurt us, but we made it up during the rest of the fair,” he said.

After pondering the issue a little further Egger continued, “Fear of the coronavirus affected sales a little bit. The media didn’t hurt but it definitely didn’t help our sales. There was an was announcement on the news about a person in Mexicali who had the coronavirus and then they it was not the coronavirus. It’s all political.”

The California Mid-Winter Fair & Fiesta hires members of the El Centro American Legion as staff during the fair and donates to the post for the service volunteered by its members. Tracey Rascoe, a Legion member, was working in the Imagination Gallery on March 8, the last Sunday of the fair.

“After the announcement that someone had the coronavirus in the Imperial County, the next day I noticed our hand sanitizer started being used more. I noticed kids were wearing masks,” he said.

“I feel it’s very hyped up,” Rascoe said of his thoughts about the virus. “We have had more people who died of the last flu virus than the coronavirus. At this point, I think the media is hyping it up more than what it is.”

He continued, “I have friends in Vancouver, Wash., who can’t get hand sanitizer, toilet paper or water at Costco and Wal-Mart. Stores are sold out. People there are scared because more people have been confirmed in Washington with coronavirus than anywhere else.” Both El Centro Regional and Pioneers Memorial Healthcare District gave out hand sanitizer at their fair booths. Parents were willing to wait in a short line to get it for their children.