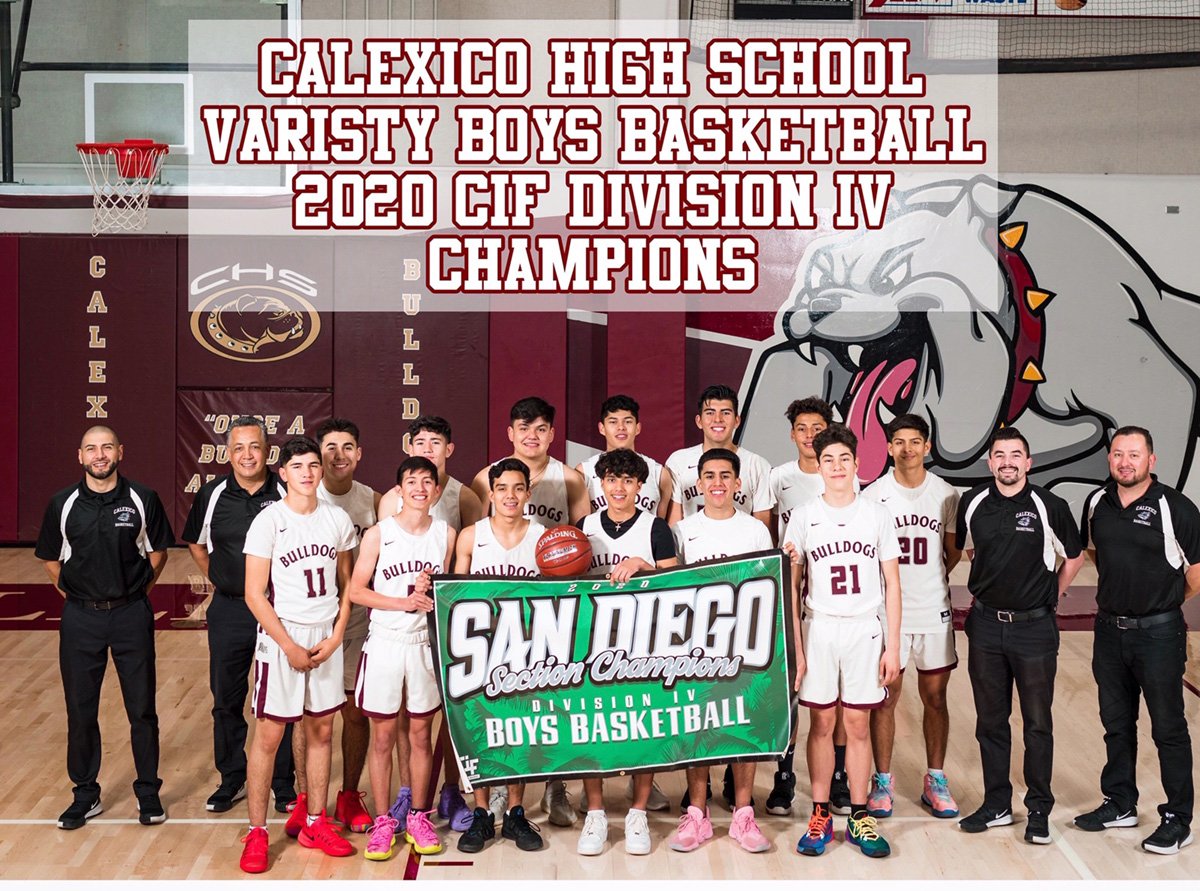 CALEXICO HIGH — As courtside announcer for the Calexico High School boys’ varsity basketball team for the past 14 years, John Moreno knows the difference between happenstance and hard work.

“This team had all of the right elements to win the championship,” Moreno said recently. “It was a perfect storm.”

The 13-member 2020 CIF-San Diego Section Division IV champions, the first-ever CIF championship squad in the school’s 118-year history, “tired out” opponents, had “guts” to drive to the basket, and “they had good basketball IQ as a team,” Moreno said.

The Bulldogs took home the title with a 70-57 win over El Capitan in San Diego on Feb. 28.

“You didn’t see them get frustrated or down” in game-time settings, he added.

Off the court, the Aurora High School principal explained the team had respect for each other and their coaches, worked hard in the classroom, and built a bond with each other that was central to success.

Calexico High School Principal Gabrielle Williams-Ballesteros could see it, even though she’ll admit to not knowing much about sports.

“They could communicate without even trying to communicate,” she said. “This bond, this family bond, was clearly visible on the court.”

By all accounts, this was no Cinderella squad and no chance creation. It was a carefully crafted team in which many moving parts came together at the right time, under the right leadership, with the right group of young men leading the way, head coach Hugo Estrada said of how the championship season came to be.

Who Are the Bulldogs?

For the core of the team this journey to a championship season started on neighborhood basketball courts and in grade-school recreation leagues where some had been playing together from as young as 5 years old.

The result this year was a 27-4 overall record, a 5-1 Imperial Valley League mark, and the number-one seed going into the CIF-San Diego Section tournament.

Unfortunately, the Bulldogs would go on to make a first-round exit from the CIF state tournament, losing 81-65 to San Diego’s University City on March 3, but the team brought glory to Calexico and made its mark in the record books.

The best a Bulldogs boys’ varsity squad had ever done in CIF was a third-place sectional finish in 1963, Moreno said, and the team hadn’t won a league championship since 1996.

“It was a really good experience to come together with a great group of guys and make history and create a culture in Calexico,” said 17-year-old Derek Lopez, one of the team’s three senior captains. “It was amazing to see the community come together and support us all season.

“All the work paid off to be able to bring that championship back to Calexico,” the starting forward added.

“This is a group of very unselfish individuals. Everybody understood their role. One of the things that we tried to display every time we played was our energy,” said Estrada, a second-year head coach who has been involved with coaching some level of the school’s basketball program for eight years.

It was “non-negotiable” that the team would “play harder and show more effort than their opponents, especially on the defensive end of the floor,” he added.

On offense, it was “smart decisions and be patient” with the ball and “these are probably our trademarks as a team,” Estrada said.

“Our team is not a big team, our biggest is 6-2. We knew we weren’t the most athletic. We needed to be smarter, take care of the ball, teams had to play at our pace,” he added.

The championship process started with the coaches.

Estrada, a 2000 Calexico High graduate, played on the varsity team under his now-assistant head coach, Juan Rodriguez, and then played two years at Imperial Valley College before embarking on a five-year professional basketball career with Soles De Mexicali.

There, Estrada said, he played with and learned from NBA players and great coaches.

When he put his own coaching staff together, they attended coaching clinics to hone skills and become better organized.

“We wanted to build a new culture on the team” that was going to revolve around “a good family environment” and “group bond” among players, he explained.

Estrada and his staff decided early on that a year-round approach and getting lots of games under their belt was going to be required.

The staff knew it was halfway there with the core makeup of the squad, Estrada said. The players who had been grade-school friends and teammates–Lopez, Mathew Piña, Fabian Reyna, Armando Ramirez, Emmanuel Serrano and Luis Gastelum–had been playing for the Calexico High program since they were freshmen.

“Our boys really listened to what the coaching staff had to say, they believed in our program,” the coach added.

The squad would spend many hours together, playing numerous games and in tournaments starting last spring, including 25 games over the summer, around the region and in Mexicali, Estrada said.

“I can’t say enough about this group of kids. They really made the effort and believed in this team. … They sacrificed a lot in practice and in games,” the head coach explained. “Resilient. Respectful. They shook my hand and the coaches’ hands at the beginning and end of every practice.”

What the Champs Have to Say

The players agreed hard work and a strong bond were integral to success.

“The season, honestly, was amazing. Everybody had each other’s backs … we had faith in our teammates, and no one had to do all the work,” said Piña, 18, a senior captain and guard.

Bonding as a family was “pretty natural,” he said, adding the teammates were always together on and off the court. He said winning was an extension of that.

“It’s very surreal,” Piña said of being CIF champions. “We’ve all been talking about it since we were freshmen.”

Senior captain and guard Reyna, 18, said as a freshman he told his coaches, “My senior year, we will win the CIF title … and to actually go out and do it was an amazing thing.

“This whole season would not have been possible without my family, my parents, my coaches, but most importantly, my teammates, and I will be forever thankful for a memorable season,” Reyna added.

“It was a very great season. I’m going to miss it. We were a very good family, like brothers … Hopefully we made the city of Calexico proud,” Piña said.

“We were brothers on that court, not just teammates,” Reyna said.

“I’m thankful for everyone that made our senior year so special,” Lopez added.

The younger players, who will return to defend the title next season, already know what to expect.

“We’re all going to be working hard and see where that takes us next year. For now, us returners, we know what it takes to get there. We’re only going to work harder,” said sophomore guard Aaron Tabarez, 16.

“I want to thank my teammates, a great group of guys with great chemistry. And our coaches, they taught us not just about basketball, but about life, too,” Tabarez added.

Help from the ‘Sixth Man’

Community support was one of the intangibles that factored heavily into the Bulldogs’ championship run, Estrada said.

“Parents, staff, they all deserve credit for supporting us,” he said, adding the community support “was really something special.”

During pivotal games at home and on visiting courts throughout the Imperial Valley to San Diego, Estrada said Calexico’s ardent fan base filled gymnasiums. He recalled when the IV League title came down to the final league game of the season at Southwest High in El Centro “there was so much garnet (school color) in the stands … They were louder, too.”

The community support “made the games feel even more exciting. It took the pressure off the games and made us feel like we were playing at home. It made us want to go out and put on a show for the Valley,” Lopez said. “It feels good to represent the city of Calexico. They supported us all season. It just feels great,” Tabarez added. 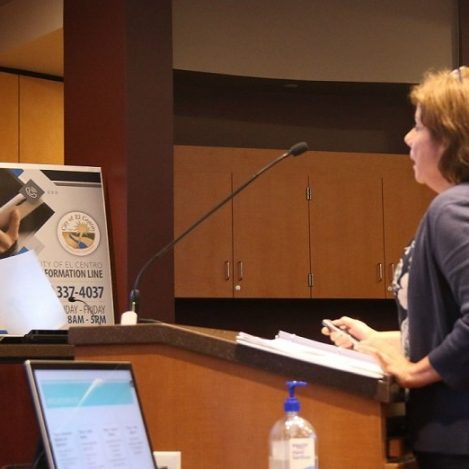