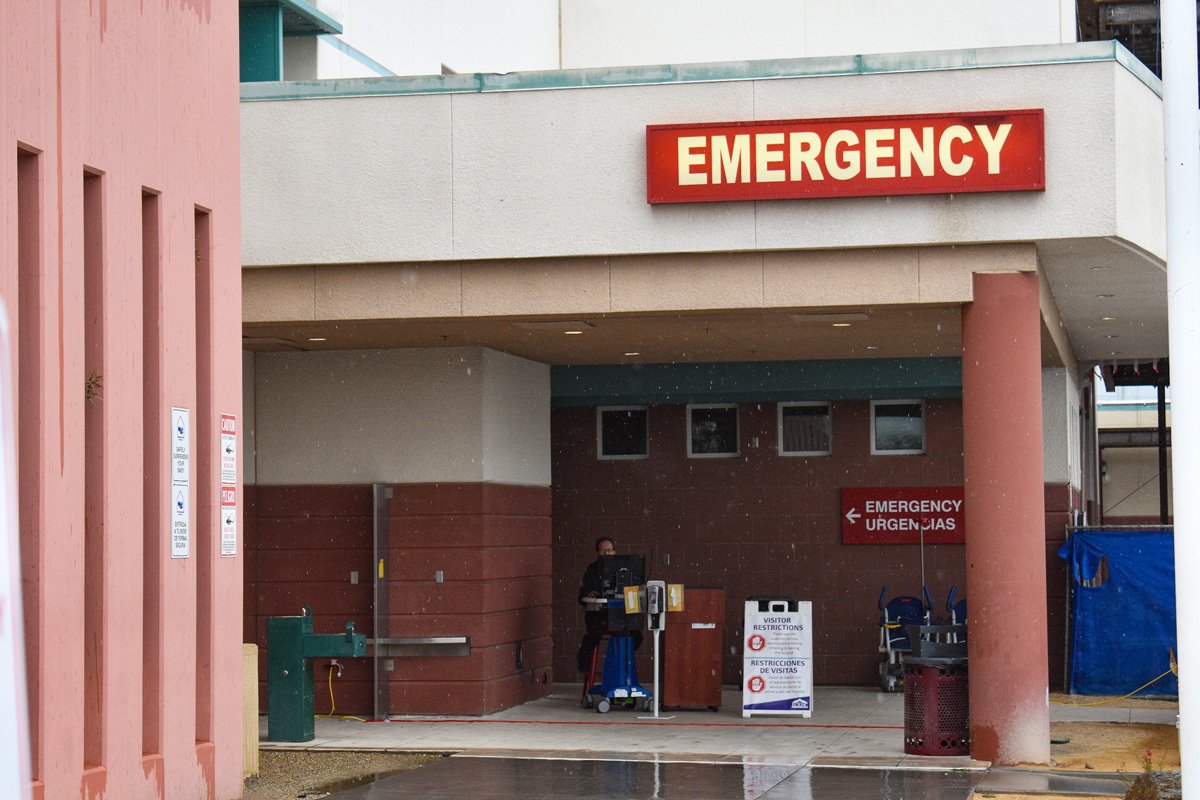 Emergency rooms such as this one at El Centro Regional Medical Center could get busier due to the COVID-19 flu virus, now declared a global pandemic by the World Health Organization. | Corissa Ibarra photo
Home
COVID-19
In COVID-19Featured StoriesLocal News

IMPERIAL VALLEY — Even as the World Health Organization on March 11 officially declared the COVID-19 flu outbreak a global pandemic, its impact was being felt in Imperial County despite no confirmed local cases.

Among the most notable developments were a handful of suspected cases, the cancellation of a major event and the declaration of a county emergency. Local schools remained open, though the situation is being closely monitored, the county’s top school official stated.

“There is increasing urgency in containing the virus, and all reasonable steps will be considered. Schools are already evaluating travel, mass gatherings and events, and other activities that may need to be modified or eliminated,” he added. “The situation is evolving day-by-day, and our community should feel very confident that our schools are actively engaged with local, state, and federal agencies in a coordinated response to protect our community.”

The top candidate for a confirmed local case involves a woman in her 70s who traveled to Florida recently and is being treated as the first possible case of COVID-19 in Imperial County. She is in isolation at El Centro Regional Medical Center, according to health officials, awaiting results of additional analysis.

A positive test has not been confirmed and no official cases of COVID-19 have been found in Imperial County as of midday March 11.

The woman, who was brought to the El Centro Regional emergency room on March 8 and held in isolation since, is being treated as the first case of the virus after initial test results came back inconclusive March 10.

“There is an older female at our hospital with possible COVID. I say possible because we do not have our final tests back. We have preliminary results that make us worried,” physician Christian Tomaszewski said during a hospital press conference late on March 10.

The initial samples taken from the woman were tested in a San Diego laboratory but were inconclusive. She has been retested and her new specimens sent to San Diego and to the Centers for Disease Control and Prevention in Atlanta, Tomaszewski said.

The emergency physician said she is being treated as if she has the virus.

“This day was going to come. We all knew this. You can run but cannot hide in El Centro. COVID will come here like it has in almost every major city in the United States and in the world,” Tomaszewski said.

“The good news is, even if this case is not COVID, it means that we are well-prepared,” he added.

ECRMC Chief Executive Officer Adolphe Edward held a similar press conference March 8 to get in front of rumors and social media chatter regarding the virus. He announced the woman had arrived at the ER complaining of side pain and meeting the criteria for COVID testing and pre-cautions.

The woman had been put in isolation and a limited number of staff were treating her, Edward said. Those in charge of her care had been properly equipped, including being issued CDC-recommended masks and other protective gear, he added.

Two additional cases had come into the ER on March 10 that were also tested for COVID-19, Tomaszewski said. Testing is taking 24 to 48 hours to complete, Edward said at the March 10 press conference.

At least one COVID-19 test has come back negative, physician and county Health Officer Stephen Munday said March 10 during a report to the county Board of Supervisors.

More than one test has come back negative, Munday said. However, in a follow-up interview he refused to discuss specific numbers when asked to clarify how many people had been tested in Imperial County.

ECRMC officials said they had been in contact with Munday and the county Public Health Department staff prior to the start of the press conference, which was held at 6 p.m. on March 10.

It was unconfirmed that at least one of the negative tests came from Pioneers Memorial Hospital in Brawley. Numerous messages to Pioneers’ public information staff went unreturned as of late morning on March 11.

ECRMC staff and El Centro city officials said they were at the March 10 press conference to assure the public the situation was under control and that people need not panic or overreact concerning COVID-19.

“This is a very serious matter … It was just a matter of time before we have a coronavirus case in Imperial Valley, in El Centro,” El Centro Mayor Efrain Silva said, but he added “don’t panic.”

Meanwhile, county Public Health officials continued to say the risk to Imperial County residents was low during a report to the county board.

Although Public Health has activated an operations center staffed with about 20 people to field concerns and provide information about the virus,  the agency is “at a low level of response now,” public health Director Janet Angulo told the board.

Public Health has been in close contact with both hospitals, labs and healthcare providers, law enforcement and educational agencies and many others, including counterparts in Mexico, Angulo said.

The county’s Public Health website has become a “hub for information,” she said, full of guidance documents and up-to-date information from the CDC and other agencies.

Munday told the board several tests are pending and that “one came back negative” on March 9.

While Munday said he is being made aware of the results of testing as they come into public labs and through healthcare providers, he clarified March 10 he is now requiring private laboratories in the county report to him as well if they come across positive test results.

During his presentation to the board, Munday spoke about the “infectiousness” and “severity” of COVID-19 in comparison to the typical flu, which itself has been strong this year.

The “infectiousness” of COVID-19, which like the flu is spread through “droplets transmission” such as coughing, sneezing and even talking, is much higher than the typical flu strains, he said. Presently, a COVID patient is infecting an average of two to four other people, Munday said.

On the other hand, the “severity,” or mortality, of the standard flu appears to be higher, he added.

“Early data from China showed between a 2.5 to 4 percent mortality rate,” Munday said, adding as cases increase “the estimate of fatality is dropping as we collect more data.”

As of March 11, when the World Health Organization declared COVID-19 a global pandemic there were 118,000 cases and more than 4,000 deaths worldwide, according to multiple media reports. U.S. cases numbered about 1,000 with deaths at 31, reports stated.

By comparison, about 20,000 people have died in the U.S. from influenza this season, including five people in Imperial County, according to the most recent CDC data.

Meanwhile, as major public events are being cancelled or rescheduled throughout the nation due to COVID, Imperial County is not immune. On March 10, the Naval Air Facility El Centro announced cancellation of the March 13 Food and Entertainment Fest at the base due to concerns over the virus. However, the March 14 Blue Angles air show was still on as of March 11.

“This morning, at the request of Commander Navy Region Southwest, we were asked to limit the scope of our open base events this weekend. To that end, we have decided to cancel the Food and Entertainment Fest and press forward with the air show (March 14),” NAF El Centro public affairs officer Kristopher Haugh reported in a news release.

In related news, the county board on March 10 ratified previous March 5 declarations of a local health emergency over the virus by Munday and a proclamation declaring a state of emergency by county Executive Officer Tony Rouhotas Jr.