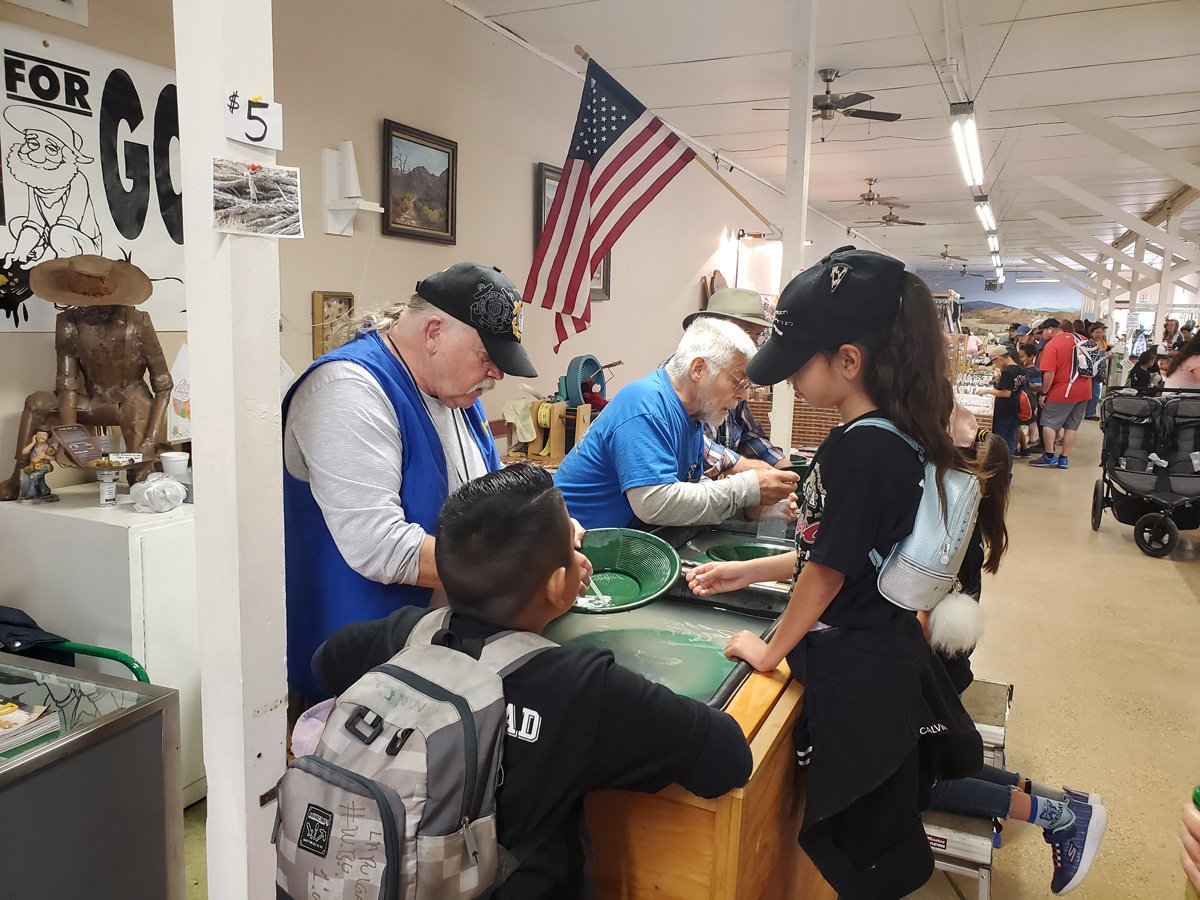 Members of the Gold Club pan for gold with students from Cesar Chavez Elementary School at the Imperial Valley Gem and Mineral Society Building at the Fairgrounds in Imperial on March 4. Students visited as a part of activities related to the annual Mid-Winter Fair and Fiesta. | Jayson Barniske photo
Home
Regional News
In Regional News

IMPERIAL — A must for every visit to the California Mid-Winter Fair & Fiesta is the Imperial Valley Gem and Mineral Society building. Despite initial appearances, the history of the group and some of its senior members can’t really be measured in geological time scales.

Paul Steward Jr. said he was introduced to the Society in 1978 by his father who had by then already been long-time a member.

Steward explained some of the history behind the club’s building, saying, “The club has always done demonstrations and shows in the building it is in now. The building wasn’t always enclosed like it is now.”

Steward explained the club originally held meetings in a smaller building towards the main entrance of the fairgrounds and that for many years the club’s current building lacked both air-conditioning and a roof. The building was originally the tuberculosis sanitarium in Holtville.

The Gem and Mineral Society building and several others were moved from Holtville to the fairgrounds during one of the fair’s early expansions.

“In the beginning the agreement with the fairgrounds was we could use the building for club meetings as long as we did one rock show every year.” Steward explained. “Over the years there was a little difficulty with different fair managers so we lobbied to the Imperial County Board of Supervisors and got it in writing that we could use the building.”

The Gem and Mineral Society was founded in 1939 and since then has always been the fair’s hidden gem.

“Allen Maines, the man the Maines Elementary School in Calexico was named after, was one of the original charter members of the club,” club Vice President James Egger added.

Egger shared the story of how he discovered the Gem and Mineral Society 20 years ago, saying, “I just happened to walk in one fair and heard the club was going on a group trip to rock hound in Mexico, so I joined.”

The group later lost its guide to Mexico and had to cancel the scheduled trip but by that time he was hooked, Egger added.

John Pyle is the president of the club and has been a member since 2009.

“I started out in the club to hang out with my dad because he was a member of the Gold Club and as he was getting older I wanted to be with him when he went out in the desert,” Pyle said.

Members of the Gem and Mineral Society have the option to join the Gold Club, a group that prospects for gold locally.

Looking for precious stones isn’t the only hobby for one Society member. Steward is a silversmith and makes his own jewelry.

“I learned enough from my father to get started in silversmithing. Then I went out and studied and took other classes,” he said.

Steward is willing to teach his trade to other Gem and Mineral Club members. The club also offers classes in making cabochons (polished and shaped stones) and wire-wrapping jewelry, among other lapidary arts.

Joining the Gem and Mineral Society is easier than striking it rich and finding gold in the desert. Prospective club members must attend two functions and pay a $20 fee to join. The society currently has 50 members and meets every Wednesday from September to June.

As the rock hounds spoke in the Gem and Mineral Building during the fair they pondered what has helped the Society maintain such a long-time presence at the fair.

Steward chimed in, saying, “Have you ever seen a kid that didn’t like rocks? They bring their parents in. It’s a good for families and a lot of people love the opportunity to do something with their kids.”

One thing is certain, when looking for precious gems and minerals in the Imperial Valley, the only thing you will find better than the rocks are Gem and Mineral Society members and their stories.

County Forges Ahead in COVID Fight, As State Rolls Back