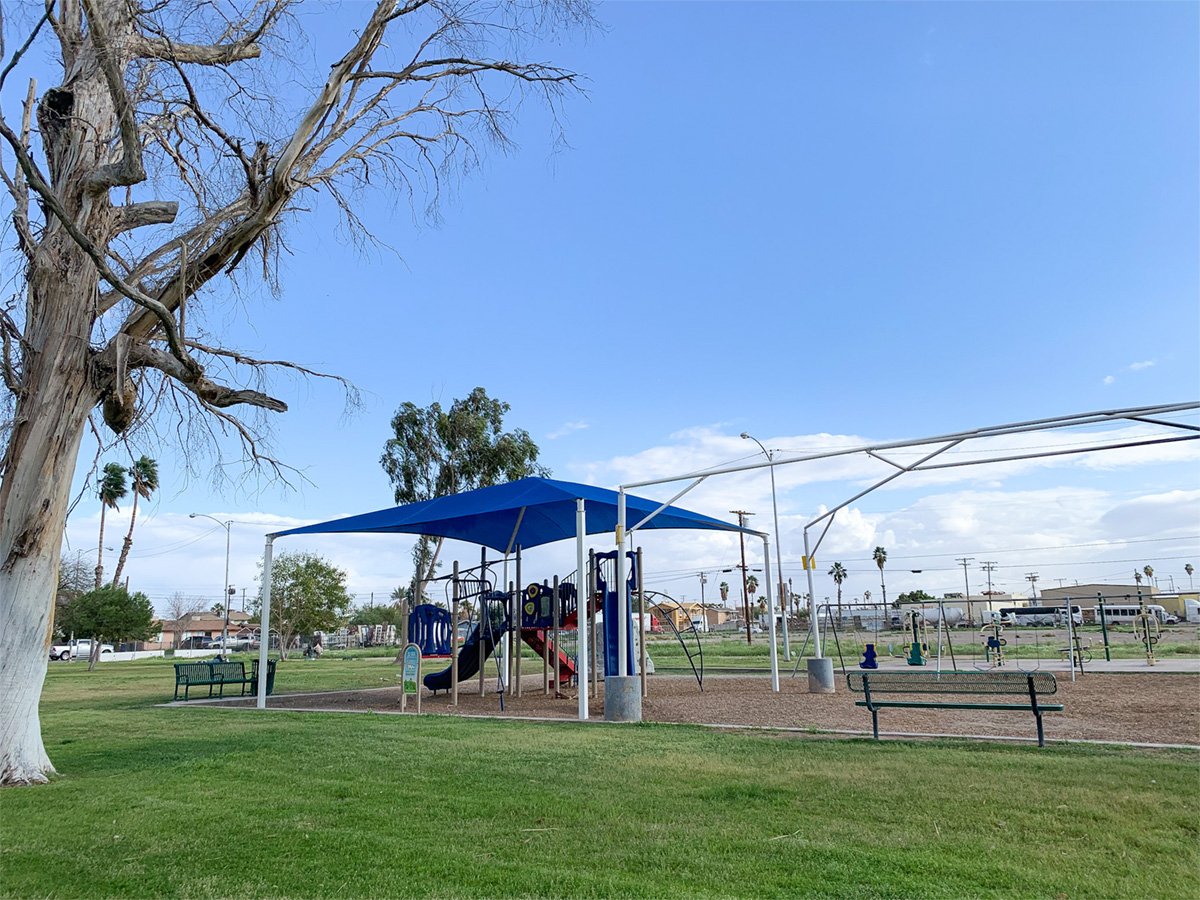 Heber Park on Ollie Avenue in Calexico is scheduled to get a major overhaul due to the city receiving an $8.5 million state grant. | Corissa Ibarra photo
Home
Local News
In Local News

CALEXICO — Gabriela Garcia has a history with Heber Park and a unique vantage point for its coming multi-million transformation from a simple green space to what is planned to be state-of-the-art community facility.

For Garcia, better known as “Gabby,” it’s been her neighborhood park for more than 50 years, where she and her four sisters and one brother grew up after moving into a house directly across the street in 1969, when she was just 6 years old.

It’s also been the neighborhood park for her own family, where for about 30 years she has lived in almost the same spot but in another house, next to her mother’s home on the same lot. There, she raised her own son, Dominic, now 22, in the 900 block of Ollie Avenue.

“I think it’s really exciting. I can’t wait. It’s going to be something to see once it develops,” Garcia said during a Feb. 28 interview. “I really care about what happens to (Heber Park). I want it to be an area people can go and enjoy.”

This was just a few days after a Feb. 25 announcement Calexico had been awarded an $8.5 million state grant to redevelop the park, double it in size and build the city its first indoor gymnasium it will not have to share with the local school district.

The grant is not a total surprise to Garcia, though. Her unique vantage point also extends from her job.

For 30 years she has worked for the city, and for the past several years she has been clerk to the Calexico City Council. From there she got the chance to witness first-hand the process to seek out these funds and develop a plan to turn her neighborhood park into what will be more than five acres of amenities like the west side of town has never seen.

A gym is only part of what is planned. The grant will cover the cost of new basketball courts, a soccer pitch, an updated playground area, new restrooms and picnic areas, a walking and bike path and parking lot.

Overall, city officials continue to work with limited resources on other parks around town as well, including an ongoing expansion at Adrian C. Cordova Park. The two refurbished parks will give the city two crown jewels in its parks system, City Manager David Dale said.

Cordova will be a hotspot on the east side with the ballplayers of the community as lighted fields will be the focus. Heber will be the west side’s premier recreational space.

Meanwhile, Mayor Bill Hodge said he wants to take stock of all city green spaces and create a five-year master plan to focus on improving all parks. Calexico has about 15 parks in all, from the 15-acre Cordova (the largest) to Cortez Park, which just comes in under a half-acre (the smallest).

Growing Up Across from Heber Park

Tucked among a neighborhood of a dozen-plus older homes and several dozen commercial businesses closer to Highway 98 and Imperial and Emerson avenues,  Heber Park is a mid-size patch of green as far as parks in the city go at 2.35 acres.

With a fairly modern playground in one corner and some restrooms, Heber is just a few dozen trees dotting the landscape and not much else. It’s a single, square-shaped city block bordered by Ollie and Harold avenues and Roosevelt and Sheridan streets.

“It was the place to be when you got out of school,” Garcia said recently when reminiscing about the park.

Garcia said she spent countless afternoons riding the old metal merry-go-round and playing on the teeter-totters after school.

“We’d play baseball, softball. Just about everybody would play at the park,” she added.

In the last few years, though, not many children use the park anymore.

“Now, everything’s changed. There’s a not a lot of kids. They tore down the armory. It’s all fenced off,” Garcia said.

The old armory, which for years stood on the plot of land directly south of Heber Park, was razed some years back but is part of the park’s expansion plan. It’s where the new gym will be built and Sheridan Street separating the two lots will be closed.

Garcia said she hopes the expansion will bring more people to the area, “liven it up. Hopefully that will bring it back, so kids will play there again.”

Her own son played soccer in the park, she said, explaining, “Dominic played in the park. We all grew up being in that park. I’m going to see a beautiful project develop, and it’s right across the street from us. I get to see it every day as it moves along.”

How Heber Got its Groove Back

Eager anticipation aside, the redevelopment of Heber Park is going to take some time, Assistant City Manager Miguel Figueroa indicated.

The city still needs to get its official grant award letter from the state, execute a grant agreement and get the funding, Figueroa stated in an email Feb. 27. Next, through a competitive bid process, the city will select an architecture firm to develop the project design, plans and specifications. Finally, the city must find a construction firm, also through a bid process, and start construction.

What kind of timeline the city is looking at was not immediately available.

Getting to this point was its own journey, however. The effort included much public outreach from the city, which staged various public hearings to gather community input about what citizens wanted to see at Heber and other parks.

Although Heber Park was the only grant application awarded, the city applied for funding for three parks at the same time through the state Parks and Recreation Department’s Proposition 68 grant program. The measure was approved by voters in 2018 to provide $255 million in competitive grant funding.

As part of the process, Dale said during a Feb. 27 interview applicants had to involve the community in developing the projects and applications through community forums and hearings. Several were held in early 2019. City Public Works manager Liliana Falomir was instrumental in organizing the process and putting the applications together, Dale added.

The city had also applied for funding for Cordova Park and the Calexico Community Center. Surprisingly, Dale said, the Heber project was approved even though it was the only application that sought the maximum award amount of $8.5 million.

Although the city is abuzz about Heber Park, it continues to plug away on Adrian Cordova Park in stages and when it can afford to as it slowly returns to financial stability, Dale said.

More than $1 million was set aside for Cordova Park in 2014, after the city took out a $10 million bond for several projects to be repaid through Measure H funding, a voter-approved half-cent city sales tax.

In 2018, new playground equipment was installed at the park near Clinton Avenue and Meadows Drive, north of Highway 98 near the eastern edge of town. Currently there is a walking/running trail, parking lot, benches and lighting,

Within the last few months, the Imperial Irrigation District came out and graded the park, hauling away 12,000 cubic yards of dirt for free.

“That was a boon to the city,” Dale said. “They needed the dirt, and trucking it away cost too much for the city.”

Bids were due to the city March 5 to install fencing for three baseball fields, Dale added, with a summary of the bids to be presented to the council March 18.

Then, Dale said, the city can install irrigation in-house and plant grass once the fencing is completed.

Meanwhile, Hodge said during an interview Feb. 28 he wants the city to move forward on assessing the state of all parks to develop a five-year plan. Though he conceded resources are limited to work on parks, that’s no reason not to build a master list of tasks.

“I can’t think of anything else that has more of a direct connection to the community and its children than its parks,” Hodge said.

The city has one full-time and six part-time parks maintenance workers. Hodge said there is some level of work that needs to occur throughout the system.

For example, he said, the restrooms are in poor condition at Rockwood Park, behind city hall, and Daniel V. Gutierrez Community Soccer Field across the street from the Calexico Unified School District offices on Andrade Avenue have some “flooding” issues the city is working with IID to sort out.

Hodge wants to see a master plan include a list of every park, its most immediate needs, funding availability and a plan to maintain it at a high level.

“I’m very pleased about the Heber Park project. What’s important is it’s going to raise the quality of life for our city. It’s part of our mission,” he said.

But he added more needs to be done.

“You want to know how a community is, how it treats its citizens? Look at its parks,” Hodge said. 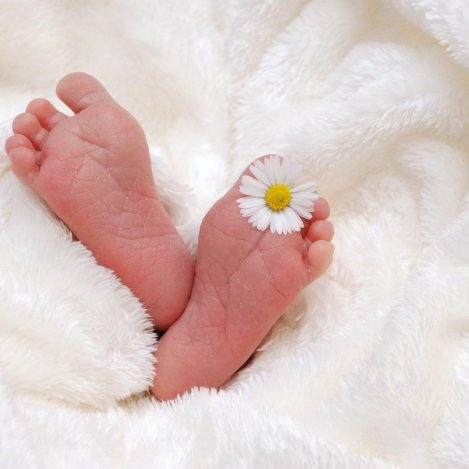