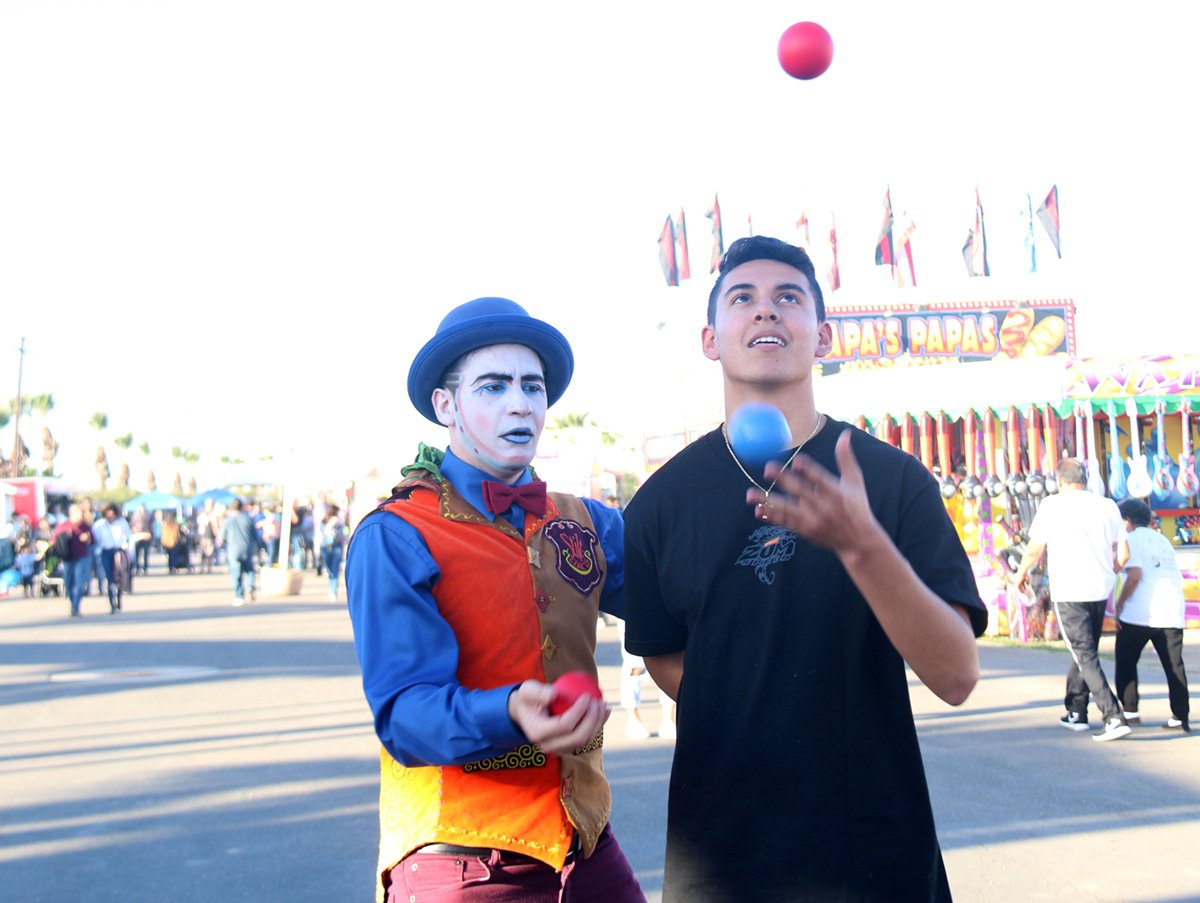 IMPERIAL VALLEY — Thrill central for 10 days is headquartered at the California Mid-Winter Fair & Fiesta in Imperial that opened at 3 p.m. Feb. 28 with some patrons lining up for admittance more than an hour before gates were open.

Among those queuing up was Adrian Aguilar, who returned to his home town from studying for a history degree at University of California, San Diego. His objective: chill out from academic rigors and share the joys of the fair with his parents and younger brother, Nate, 8.

The attraction arresting the Aguilar family’s attention just east of the Palm Oasis Stage was the Stilt Circus performed with tongue-in-cheek, yet sardonic, humor by circus clown and juggler Alex Bistrevsky.

He’s one of a stable of performers employed by the Santa Monica based Stilt Circus. But rather than rely on a stage, Bistrevsky is an old school street performer who wheels around in his interactive circus station, not much bigger than a shopping cart. Instead of groceries he totes a clown’s stock-in-trade of unicycle, stilts, a rolling globe (balancing ball) and other big-tent props.

Bistrevsky quickly entranced the Aguilars with a dexterous juggling performance. The tools of his trade, far more than a shell game to keep the audience distracted, are a carefully considered remote classroom to engage the audience to become part of the act. He soon coaxed the Aguilars to try their hands at juggling and balancing stunts.

“It’s my world and everyone else just lives in it,” said Bistrevsky. “To me, the most important thing is not just about entertaining, but I do want to entertain. Yet I want people to challenge themselves. If they can go home with a new acquired skill, that makes me happiest.”

Most underestimate themselves because if one of his audience can learn juggling in 10 minutes, they can learn anything, he explained. The act is as empowering as it is entertaining.

“Only way to fail, is never try,” stressed Bistrevsky. “I try to close the gap between the audience and the performer and allow them to participate as much as they are willing.”

After merely a few attempts at juggling foam tennis balls and balancing an upright walking cane in his palm, then index finger, Adrian Aguilar shouted with delight, “I’ve got this.”

He then conceded, “I’ve always wanted to try juggling. It’s actually really cool. I may take it up as a hobby. Then I can share it with my younger brother. This is a sharp thing.”

Jasmin Larios, another an early arrival, patiently waited for the opening with her son, Andrew Sean Leon, and husband, Chris Larios.

“I like the (carousel) swings. It’s always next to the pirate ship. I’ve always wanted to try that one,” said Andrew Sean. “I don’t want to see the bands, I’m here for the rides. And I like the rabbits, but I’m allergic to pets.”

But Jasmin foresaw a different itinerary.

“I’ll stop by the shops to buy T-Shirts and some of the photographs and drawings. And I also like seeing the (Imperial Valley) Gem & Mineral Society.”

Chris Larios, an employee of Washington Elementary School, noted he has attended the fair steadily most of his life.

“Everybody comes to the fair. I come for the refreshments but maybe we’ll return later for the Monster Trucks show. It should be a good one,” he said.

Scanning the parking lot for friends to join them were Jose Cantua and Briza Vasquez from Calipatria High School and Jose noted the fair gives him time to enjoy the company of girlfriend, Briza, as well as share the rides together.

“We mainly like the Zipper,” he said. “The twisting and turning gives you a queasy feeling but it’s fun. We also like the hypnotist (Suzy Haner). I also like the funnel cakes, plain.”

Added Briza, “I like the bacon-maple donuts … and I want to see the baby goats.”

Another life-long fair devotee, Rebecca Mendoza, was in 4H as a student, when she raised rabbits. Her son, Jacob, is in the third grade.

“I want to see if they got the same rides and animals from last year,” Jacob said. “My favorite ride is the caterpillar. It’s kind of dangerous because you think you’ll fall off at the top. But it goes too fast (to fall). It’s a good ride.”

Pablo Mendoza, Rebecca’s husband, a physical therapist, maintained he likes most of the exhibits.

“It brings me back to my childhood,” he recalled. “I’m happy to see how thrilled my kids are. But I also like the fair food, especially the fried Twinkies.”

Betsy Reihle, waiting for the opening with husband Larry, revealed she was looking forward to the baked goods competition.

“I always want to see who wins,” she said. “I sometimes enter but I missed the deadline. My ‘blue ribbon’ dish is carrot cake. I just use flour, grated carrots, pineapple and cream cheese frosting.”

Invited to kick off the fair by singing the Star-Spangled Banner was Paola Sanchez, who performs with the Imperial Valley College Chorus as well as being a soloist at various events throughout Imperial Valley.

“I’ve sung since I was 13,” she said. “This is my first time singing the National Anthem at the fair. I was so nervous. I’m going to stay for maybe some of the rides, but I’m really here for the corn dogs, carne asada and churros—everything–you name it. I’ll stay until I run out of money.” 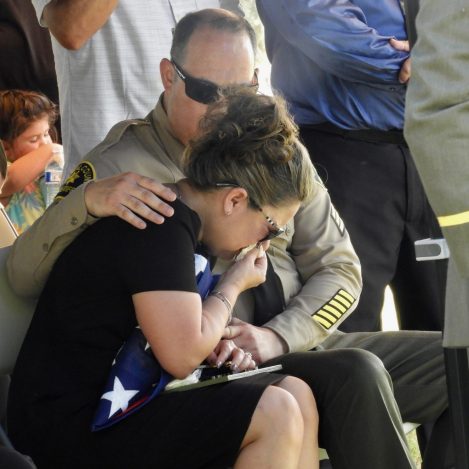