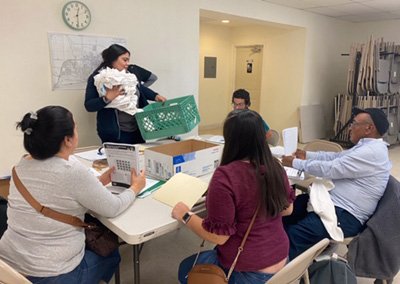 CALEXICO — A first wave of  volunteers began canvassing Calexico neighborhoods the week of Jan. 27, going door to door to hand out fliers to educate residents about participating in the upcoming U.S. Census.

A group of seven joined in initial training Jan. 28 before hitting the streets with paper fliers in English and Spanish. The handouts inform Calexico residents of the need to be counted and what to expect when the official counting begins in March, said Ricardo Ortega, a special projects coordinator with Calexico Neighborhood House.

Ortega and Neighborhood House are helping the city coordinate its Census outreach efforts.

Volunteers also were to begin setting up informational tables at a few local churches on Feb. 2, Ortega said.

“The count is important, like it says on our fliers. We want to make sure everyone is counted in the community—federal dollars are at stake,” Ortega explained.

The Census helps determine how much federal funding municipalities receive and are used to draw legislative districts. Census Day is April 1 but the actual count encompasses months.

“It’s very important we count as many (residents) as possible so we can qualify for future funding and representation,” Calexico Mayor Bill Hodge has said.

Hodge, along with Ortega,  is a co-facilitator of the city Census committee and was instrumental in getting the committee started in mid-2019.

Neighborhood House is co-lead agency, along with the city, of what is known as the Calexico 2020 Census Collaborative. Members include the Calexico Housing Authority and Campesinos Unidos, Ortega said.

Census data, updated based on a count every 10 years, determines the number of seats a state has in the U.S. House of Representatives and other state and federal lines of jurisdiction. The count also factors into federal and state funding formulas and is said to represent $2,000 a year in lost federal funding for every person left uncounted, according to the U.S. Census Bureau.

The 2020 Census will determine how more than $800 billion in federal resources will be distributed to state and local communities each year for the next decade, according to the bureau.

Calexico is considered among the “hardest to count” communities in the state due to its many Spanish-only speaking residents and an intrinsic fear of the government by high-minority, high-immigrant populations, officials have said.

Although U.S. Census Bureau workers will be doing the counting and much of the heavy lifting when initial headcounts get underway in late March, it is community volunteers who are leading the first wave of outreach to inform, motivate and assist with getting the word out.

Calexico is part of a wider Census count effort being led by the county, where Calexico’s subcommittee is eligible for at least $17,000 through the county to pay for printing fliers, small stipends to volunteers and for non-administrative costs associated with the messaging, Ortega said.

In addition to going door to door through the entire city and setting up tables at churches and other events, Ortega said additional plans include setting up two informational kiosks that will eventually be used to assist residents in filling out online Census forms. Those locations will be the Enrique “Kiki” Camarena Memorial Library and Calexico Neighborhood House, he said.

It’s unclear how successful the first wave of volunteers was, Ortega conceded. A report was due Feb. 4 on how many houses the volunteers made it to and how many fliers were handed out.

Initial plans were to begin with going to homes on Paulin, Rockwood and Heber avenues, Ortega said, and make it to two churches.

The committee has three main objectives — to inform, motivate and assist, Ortega noted. The informing is the phase in which the local volunteers will be most active, as statewide marketing campaigns will take up the motivation effort through radio, television, print and social media advertising campaigns.

Calexico had an official population count of 38,572 in the 2010 Census. However, that number is expected to have grown significantly. The state Department of Finance in May 2019 reported Calexico was home to an estimated 42,198 people as of Jan. 1, 2019.

The first official part of the Census 2020 count is already underway, when bureau officials began counting remote parts of Alaska in January, according to the Census Bureau.

Noticeable local efforts will begin in early March with the start of the “self-respond” phase. Beginning March 12, some 95 percent of households in the United States will begin receiving packages in the mail from the U.S. Census Bureau.

While National Census Day is April 1, the week of March 29-April 4 is National Week of Action.

All households will have the chance to “self-respond” to the Census either by Internet, telephone or the “traditional” paper questionnaire. This is the first Census to have an online option.

After the initial wave of letters, as many as four additional pieces of correspondence will be sent out, including a reminder letter, a reminder post card to households that have not reported, a reminder letter plus a paper questionnaire to those who have not self-responded (April 8-16) and an “it’s not too late” post card, also to non-responders, according to the bureau.

When the Census Bureau does not hear from a household in the self-response phase, which ends April 30, there will be a follow-up operation to get everyone else counted. That includes door-to-door visits, conducted from May 9 until the end of July, according to the bureau. 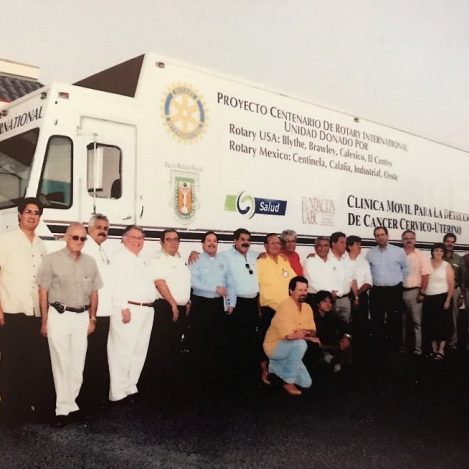 Calexico Rotary Club Continues Its Legacy of Service Through COVID