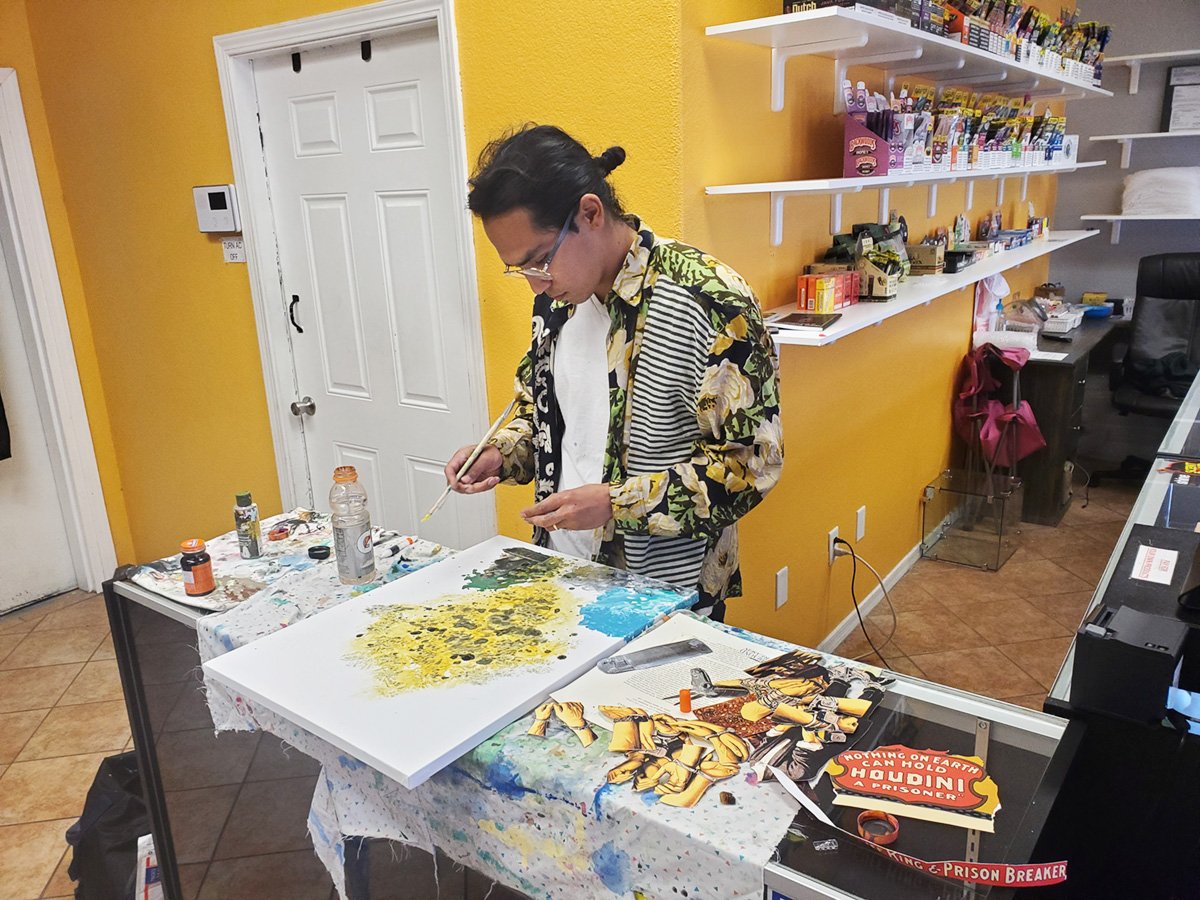 EL CENTRO — For some, art is about creating beauty. For El Centro artist Michael Mixolydian, creating and sharing art is a way to change his world.

“I’ve been creating art since I was a child, but I didn’t consider myself an artist until eight months ago,” Mixolydian said, describing the journey of discovering purpose through his artwork.

“Up until then, I was living a completely different and destructive lifestyle. From that point on, I decided to recreate myself and therefore create art,” he explained.

Inspired by internal forces calling him to change, Mixolydian recalled he discovered a passion for painting everything under the sun’s winter abode.

“I did a lot of searching within myself and realized the beauty that was at my fingertips. And realized I had to take advantage of it and inspire others,” he added.

Mixolydian specializes in surrealist art which is a form that attempts to express images seen in dreams. Some legendary surrealist artists are Picasso, Salvador Dali and Basquiat.

“Lately, I have been deriving inspiration from cultural art, primitive art and even religious art. Any native art, whatever it is, from pottery or painting, I am trying to tap into what it is that makes humans want to create something outside of themselves.”

The young artist realizes his art has the power to cultivate a passion for creativity in others; everyone has the potential within themselves to create artwork.

“I get internal and universal approval from creating art. Everything in the universe works on balance and that adds balance to my life and way of being,” he said.

Mixolydian primarily paints on canvas and enjoys creating street art when given the opportunity.

Mixolydian painted a mural of the Imperial Valley’s landscape on a cinder brick wall surrounding a trash bin behind Cuchi’s Raspados in El Centro. The mural incorporates images of desert scenery, windmills, petroglyphs, the Salton Sea, and even the pyramid at the Center of the World in Felicity in eastern Imperial County.

“If I had not seen other people’s street art, I would not have been inspired to create art and share it with others,” he said.

Unlike street art, which tends to have a shorter lifespan, Mixolydian appreciates the value of painting on canvas as it gives his art the opportunity to last indefinitely.

On Jan. 24, Mixolydian worked on a painting titled “Arrested Development” in between customers during his day job at Karma Smoke Shop in El Centro.

“My past doesn’t tie into the way I am now and that is exactly what this painting is trying to say,” he explained.

The countertop Mixolydian worked on held a canvas and was scattered with various paints and brushes. The painting will ultimately incorporate acrylic and collage displaying magazine images of Houdini in handcuffs and a picture of the Code of Hammurabi, the oldest known archaeological example of written law.

“‘An eye for an eye and a tooth for a tooth’ was first written in the Code of Hammurabi,” he said. “The phrase ‘arrested development’ is a play on words. It means you have become stagnant and are no longer growing or going anywhere. When I was living a criminal lifestyle, I was destroying myself. When I realized that, I changed my life.”

Like Houdini, Myxolydian magically broke out of the system that was arresting his development and changed his life for the better.

Myxolydian gave powerful and poignant advice for anyone apprehensive about sharing their art with the world: “It is not about you. Its about what you contribute to this whole thing that was here before you.”

Myxolydian has an upcoming art show in March at the Kayak Club in El Centro and is working on getting his art into different galleries in Los Angeles. For those who want to see his art now, find Michael Mixolydian under his name on various social media.