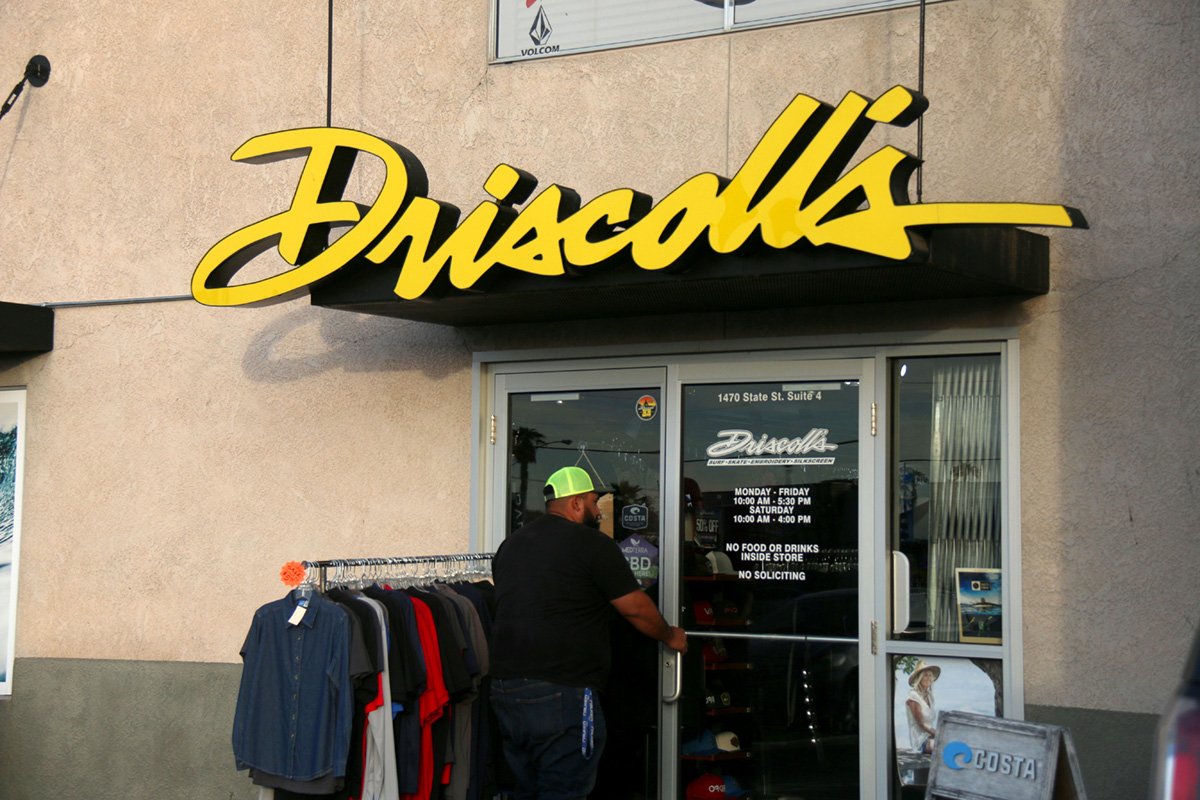 A customer enters Driscoll's, an active wear and sports accessory shop at 1470 W. State St. in El Centro, a short distance from where city police on Dec. 29 fatally shot a man who approached them brandishing a knife. Store owner Tammy Driscoll said there is a problem with the homeless congregating in the area and using it as a restroom. | William Roller photo
Home
Regional News
In Regional News

EL CENTRO — In the aftermath of the Dec. 29 officer-involved shooting in the parking lot of the Rite Aid drug store in El Centro, area merchants expressed support for police but worried blight and violence will continue to harm commerce.

Manuel Gonzales Verdugo, 50, the suspect, was pronounced dead by El Centro Fire Department paramedics. Police were summoned by employees at the Rite Aid at 1501 W. Main St. about 7 a.m. after Verdugo allegedly shoplifted several knives, police Cmdr. Ray Bonillas stated in an email. He was fatally shot by police as he approached officers while brandishing one of the knives.

The incident is being investigated by El Centro police and the Imperial County District Attorney’s office, the latter of which on Jan. 7 issued a press release seeking witnesses who were asked to call the agency at (442) 265-1175.

Armando Galeana, owner of D’Poly Taco Grill & Beer, a restaurant that shares an adjacent parking lot to the west of Rite Aid, later contemplated the potential outcomes of such an incident.

While Galeana said he was not working that Sunday and his business did not open until two hours after the altercation, he admitted the incident occurring so close gave him pause.

“He could have come in here and maybe something terrible would have happened,” said Galeana.

The restauranteur said he did not hear of the incident until Dec. 31 when he returned to work. A customer explained the circumstances to a manager who then told Galeana.

Responding to reports Verdugo may have been among the area’s homeless population, Galeana added, “We’ve had homeless people stop by and we occasionally offer them food and water. But I have never had a problem with the homeless.”

Yet Tammy Driscoll, owner of Driscoll’s, an active wear and sports accessory retailer just across Imperial Avenue, said she now has increased concern with security. For several years the homeless have congregated in the parking lot surrounding her and her neighbors’ businesses.

Recently, the homeless have become more aggressive and are using the lot for a restroom, she explained.

“I’ve been thinking of having someone drive by once in a while and clean up their (homeless) messes and encourage them to move on so they won’t use the lot as a bathroom,” Driscoll said.

The store has alarm protection and Driscoll praised police for diligently taking care of the merchants in the small plaza in which her store is located.

“When it gets out of control with the homeless the police will come and ask them to leave,” she recalled. “I haven’t talked with my neighbors. But I know a lot of them are talking about it on social media.”

News of the shooting was posted on the Imperial County Neighborhood Watch Facebook group. That is where Nancy Gaston, manager of her daughter’s antique/collectables store, Simply @ Home at 569 W. Main in downtown El Centro, said she found out about it. She told her daughter, Wendy Luevano.

Downtown has experienced the effects of the erratic behavior of the many homeless who congregate there and the incident could be just another example of that, Luevano speculated. The homeless in the area often suffer from mental illness and drug addiction, she added, noting more mental health interventions are needed.

“I feel bad about the guy but maybe it’ll push city officials to act (to improve downtown),” she said. “Main Street has become a blight over the last 20 years. I just re-signed my lease. I want so much for Main Street to change but I doubt it will.”

The tragedy of the matter was not lost on her, however.

“That was probably somebody’s father or brother,” she said. “It’s a shame we didn’t know what that man’s situation was. He might have had an addiction to drugs. Where does someone in that situation go for help?”

Anthony Aguilar, a local resident visiting downtown, said he also learned of the shooting on Facebook and added the outcome was not surprising given the circumstances.

“It was nothing out of normal to me,” he said. “If the police encounters someone with a knife, who announced his intention beforehand, they’re asking for trouble.”

Lizette Diaz, owner of Trendsetter Hair Salon at 492 W. Main, noted she also heard of the incident on social media and praised police.

“I feel the police did a great job making sure no one innocent got hurt and protected the community,” she said. “We have alarm and camera security here but I started locking the door in the middle of the day. However, the homeless have never tried to enter our business.”

Tiffany Mendoza, co-owner of Antiques & Auctions at 455 State St., said she understands the harsh realities faced daily by police. They perform well for the limited personnel at hand, she said, yet noted the occurrence does have her concerned for her shop.

“We’re not in the best neighborhood but an empty storefront will not improve the community at all,” she said. “We have a good alarm system and if it goes off, I can check my phone. We are after all less than a block from the methadone clinic.”

Mendoza added, “I could have opened (a business) in Palm Springs but that’s not my community. Improvement doesn’t just happen, you got to make it happen. But what took place at Rite Aid is not a regular occurrence.”

Cmdr. Bonillas explained police received a 911 call at 7:05 a.m., Dec. 29, involving a suspect who entered the Rite Aid. The caller alerted police that Verdugo had allegedly shoplifted several knives and maintained that he told store employees to call the police because he intended to kill an officer. Police responded and saw Verdugo still in the Rite Aid parking lot.

Police ordered Verdugo to drop the knives but he ignored them. He then charged officers with a knife in his hand, Bonillas reported. Police then deployed a bean-bag round from a shotgun to subdue Verdugo, therefore employing minimal force. Yet the beanbag rounds seemed to have no effect on him and he continued to advance toward officers.

Officers on the scene reported later they feared for their safety and responded by firing live rounds at Verdugo, Bonillas added. He was struck by gunfire and was pronounced dead at the scene. No officers were injured and the knives were recovered at the scene.

The District Attorney’s Office responded to the scene and is conducting an officer-involved shooting investigation. The officers involved were not immediately identified.

The completed investigation will be reviewed by the chief of police to determine if the use of deadly force complied with the department’s procedures. The D.A.’s office will also perform a review to find if the force used by officers violated any criminal laws.