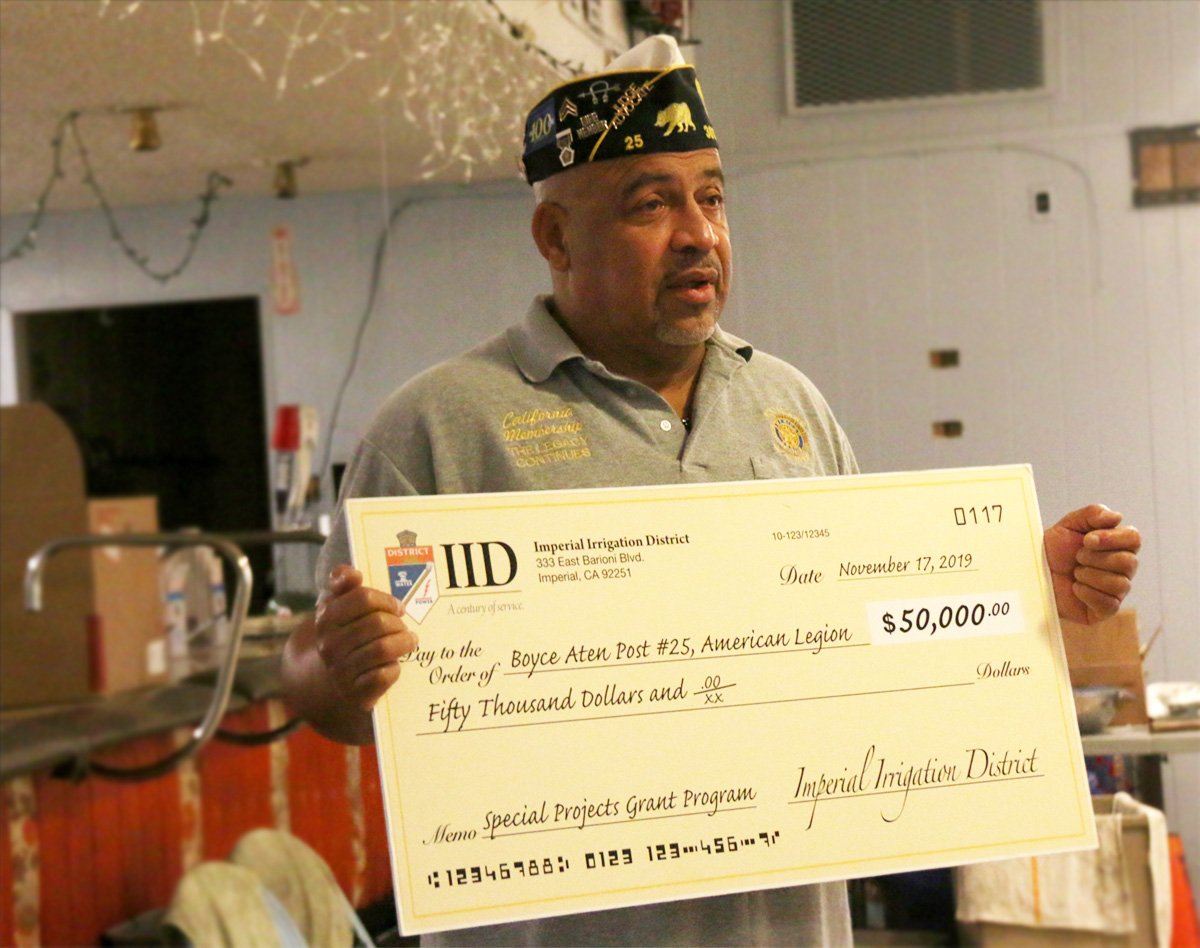 Tracy Rascoe, an executive board member of American Legion Post 25 in El Centro, on Jan. 2 shows off a replica of a check the organization received to help refurbish its lodge. The funds were received from Citizen’s Energy Corp. through the Imperial Irrigation District. | William Roller photo
Home
Regional News
In Regional News

EL CENTRO — The Boyce Aten American Legion Post 25 in El Centro garnered a grant recently that will allow it to implement needed upgrades to its kitchen.

The $50,000 was received from Citizen’s Energy Corp. through the Imperial Irrigation District, said Robert Schettler, an IID spokesperson.

“When we get grants we greatly appreciate it,” said Tracy Rascoe, a post executive board member. “But we never got a $50,000 grant, not within the life of any of our current membership. Those funds are earmarked for specific work–a kitchen revitalization.”

On Jan. 2 Rascoe and Bob Candland, Post 25 judge advocate, showed off the work in progress in the lodge lounge area, including a new ceiling and lighting.

Briefly casting a cloud over the upbeat occasion was the closure of the facility on Dec. 20 after Post 25 was visited by a state Alcohol Beverage Control agent, which required shuttering the post for two weeks, Rascoe said. On Dec. 17 someone  reported a nonmember was served an alcohol beverage without being signed in as a guest of a member of Post 25.

The Boyce Aten post holds a Type 52 liquor license issued to a veteran’s club. It authorizes the sale of beer, wine and distilled spirits, to members and guests only, for consumption on the premises where sold. Still, proper procedure requires guests to be signed in by a member.

“It was an administrative violation, a matter of protocol,” said Rascoe. “But it was not done out of malice. A mistake was made but we’re going to make sure this post is on a better track. We’re not perfect. We’re human. We’re a volunteer organization and we need volunteers to better handle hospitality service compliance. The post has been successfully operating for 100 years.”

The closure did further an opportunity to initiate a long-desired refurbishing goal with the installation of a new exhaust hood over the cooking equipment, new ventilation ducts and an improved air conditioning unit.

The new system pulls in fresh, tempered air from outside the building to replace existing air that cannot be recirculated, explained Eric Hanson, HVAC technician with Imperial Valley Air Conditioning.

Hanson and his crew got started on Dec. 16, though before work is completed permits were needed from the Imperial County Health Department and the El Centro Building Department.

“We’ll get everything fabricated to go because we don’t want to have to tear anything out,” he said. “Once it goes up, we want it to stay up. But we’ll find out Monday (Jan. 6).”

Once permitting is completed the remaining work is expected to take about three weeks.

The Boyce Aten Lounge was scheduled to re-open Jan. 4. The closure forced the cancellation of Christmas and New Year’s Eve parties and viewing of National Football League games that are a big draw.

“We’ll reopen with a bang,” promised Rascoe. “Fun, camaraderie and the wildcard playoffs. We’ll have a Super Bowl party, always a potluck for our members and their invited guests.”

Programs for 2020 include a movie night, a game night and possibly by summer a youth air-rifle team.

Along with the IID grant, the Boyce Aten post also recently received a $1,000 grant from Imperial County Board of Supervisors, spearheaded by District 5 Supervisor Ray Castillo. The post hopes to use the funds to purchase an ice machine and a bar refrigerator.

The IID grant will also cover two refrigeration units and a commercial freezer for the kitchen. Unlike businesses focused on just profit, the post’s improvements focus on its goal of service to veterans and the community.

“We’re not in it for the income,” said Rascoe. “Our income allows us to pay our bills and have a facility for our members and their invited guests to enjoy and give back to the community.”

Key to earning that income are the lounge and kitchen sales as well as the hall rental to members or the public, which is quite popular for anniversaries and life events. “We want to make the best of this adversity (closure),” said Rascoe. “Our membership is going great (200). We’ve expanded our Friday night dinners (open to the public) so seven-year-old children don’t have to struggle to eat a steak as big as they are. We got chicken fingers and fries. We have the Tuesday night snack bar (taquitos, jalapeno poppers, corn dogs, mozzarella sticks and beef hot dogs). We want to open the community’s eyes and see the family atmosphere we’ve created.” 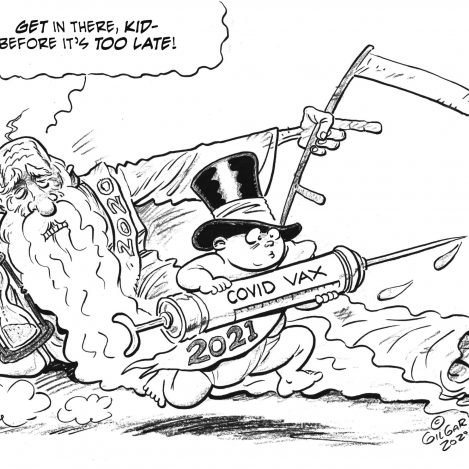