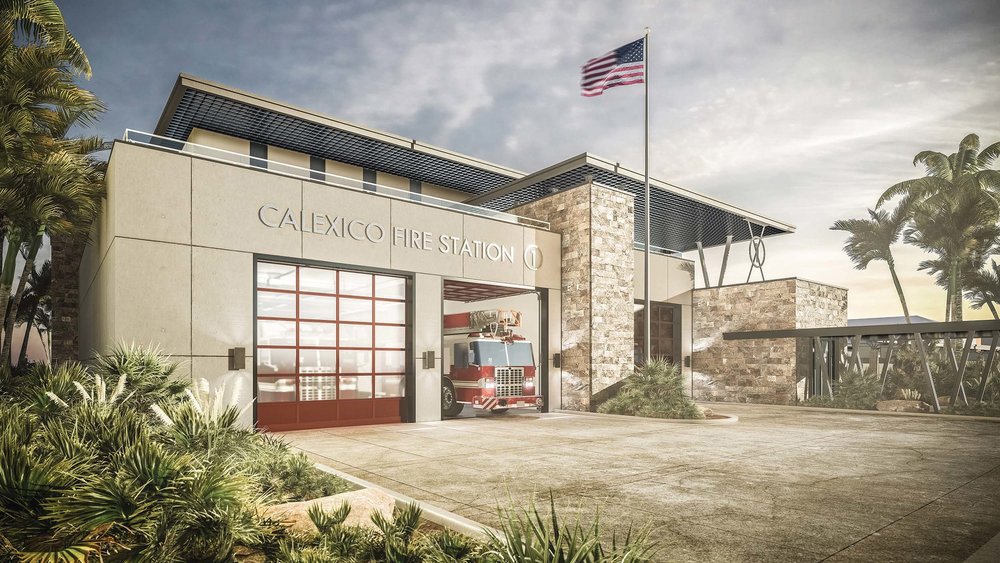 Bids Could Go Out Soon for New Calexico Fire Building

CALEXICO — After a decade of planning 2020 could finally be the year the new headquarters for the Calexico Fire Department gets built and possibly opens, according to several city officials.

The project has been fully funded for several years but not built, forcing fire crews to live out of another location since late 2017 due to the deteriorated conditions at the current fire station.

Bids for construction are expected to go out in January, said Calexico City Manager David Dale. Demolition of the semi-abandoned Fire Station No. 1 at 430 E. Fifth St. could occur in April.

The garage of the station is still used to store the department’s fleet of response vehicles, but the living quarters for the crews are inside the former Calexico courthouse on Fourth Street, directly behind the station. That is due to health and safety considerations, city officials have said.

“We’re going to demo the whole building and build new in its place,” Dale said in a recent interview.

On Dec. 18, the fire station build took a big step forward when the Calexico City Council voted to increase the contract amount it was paying fire station designer Ten Over Studio of San Luis Obispo an additional $10,500. The work will now include assisting the Fire Department in putting together the bid advertisements and information needed to get a construction team in place and the project started.

Ten Over Studio has been involved with the city fire station project since at least 2017, when the project was first designed, according to information found on the firm’s website.

It appears the Calexico designs were honored in 2017 with a “recognition award”  from the Fire Industry Education Resource Organization. However, according to backup information in the Dec. 18 council agenda, the initial contract with Ten Over Studio dates to Dec. 5, 2018.

The total amount paid to Ten Over Studio has been $557,675 since that initial contract.

Fire Chief Diego Favila could not be reached by deadline to clarify some of the timing issues or additional questions on the history of the project, including what looks to be years of delays between when the project was first funded to where it now stands.

“We tried to do the bid within the department. But when you’re trying to build a fire station, there’s a lot of specifications and laws you’ve got to follow out of California that unfortunately we are not professionals in doing that,” Favila told the council on Dec. 18.

“However, Ten Over Studio is and they are going to do the bidding for us. They have a plan on advertising for us, and pretty much take care of the whole bidding process,” the chief told the council before it approved the additional expense by a 3-0 vote.

“This will allow us to begin the demolition of the station and also start the project,” Favila said.

“Right now, we’re using the facilities at 430 Fifth St. solely to as a garage to house the fire engines and the ambulances. The day-to-day operations and the living quarters for the operations are located at 415 Fourth St., which is the old courthouse. We’ve been occupying that one coming up on three years now,” Favila explained to the council.

Calexico Mayor Bill Hodge said recently his understanding is that problems with “fungus” and “bad plumbing” were among the reasons the fire crews were forced out of the headquarters.

Fire Capt. Eduardo “Lalo” Rivera, who was in charge at the department last week while Favila was out, said the problems described by Hodge were just some of the issues. He said hazardous building materials and electrical wiring problems, weather damage and time were also some of the factors that led the department to move out around Thanksgiving 2017.

“They were unhealthy living conditions,” Rivera said during an interview Jan. 2.

Rivera said the department will continue to operate and live out of the former courthouse and also move the garage area for the fleet to the courthouse once demolition starts.

He said even the garage at the Fifth Street location is beginning to become unusable with cracks in the concrete and asphalt where the vehicles are parked. Rivera explained the department has added to the fleet over the years and that “these are some heavy rigs.”

Rivera added plans for a new fire station date back at least a decade.

Dale said during an additional interview Jan. 2 that the project has been fully funded since 2013 or 2014, when the city’s Measure H Committee agreed to fund the new station. Measure H is a 2010 voter-approved half-cent sales tax that is monitored through an oversight committee set up by the tax measure.

In 2013-14, the committee took out $10 million worth of bonds and set aside $6 million for the fire station, Dale said. The city manager noted he is confident the funding is enough to cover what he said is a $7 million price tag on the fire station build.

He added that if it does, the city has $1 million to $1.5 million in state Community Development Block Grant Program funding available for the balance.

When asked about all the delays and gaps in time between getting the project funded and getting to this point, Dale said he honestly does not know how to account for the timing. He has been city manager since December 2017.

Dale acknowledged that like the fire station several major city projects have inexplicably languished for years after being mostly designed, approved and funded. Dale said the council and city staff have spent the last year or so moving forward on major infrastructure projects.

Other examples are the Cesar Chavez Boulevard-widening project and other major roads projects.

Although neither Dale, members of the current council, nor those fire officials contacted for this story, would or could say why it has taken so long to move the project forward, a former council member who asked not to be identified said strife at the highest levels of city hall, especially in the city manager position, delayed a number of projects for years.

The former council member said the fire station was worked on to some degree through fired City Manager Richard Warne, interim manager Nick Fenley, former City Manager Armando Villa and Dale, which accounts for at least five of the delay years. There were also Planning and Public Works Department heads that changed in that time, including the firing of former city Engineer and Public Works Department head Nick Servin, the former council member said.