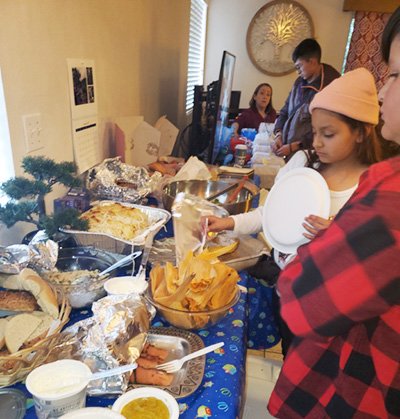 Members of Congregation Beth Jacob in El Centro meet for a potluck to celebrate the first day of Hanukkah on Dec. 22. | Jayson Barniske photo
Home
Regional News
In Regional News

EL CENTRO — Regardless of the religion you practice, food is likely an integral element of family holiday traditions. For Jews celebrating Hanukkah, food is used to help tell the story behind holiday.

Members of Congregation Beth Jacob in El Centro met for a potluck to celebrate the first day of Hanukkah on Dec. 22.

Sue Macey spoke about the relevance of food during Hanukkah as she cooked potato latkes in a small pool of oil.

“We make latkes because we are celebrating a miracle of oil and to understand that, you need to know the story of Hanukkah,” she said.

Cynthia Harvie, cantor of the synagogue added, “The Assyrian King Antiochus Epiphanes IV invaded Israel and pillaged the temple. After the invasion had been repelled, the rededication ceremony for the synagogue was supposed to last eight days.”

A requirement for the ceremony was that an oil lamp burn in the temple constantly for those eight days.

Harvey continued, “The rabbis only had enough oil to last one day. It was a miracle. The small amount of oil lasted all eight days.”

Macey brought the story full circle, saying, “We cook food in oil like potato latkes and jelly donuts to remember the miracle of Hanukkah.”

Potato latkes are a pancake made with graded potato, egg and onion deep fried with flour and salt. The pancakes are traditionally served with sour cream and apple sauce.

Harvie explained, “Jews in different parts of the world have their own unique traditions to celebrate the holiday.”

In the Imperial Valley, the Hanukkah banquet table had its own unique fusion of Jewish delicacies inspired by local culture. All the staples were there such lox (cured salmon) and bagels, quiche, salad, wine and a plethora of deserts. A few non-traditional favorites at the party were tamales and a large pinata shaped like a dreidel (a small four-sided spinning top with a Hebrew letter on each side).

Harvie elaborated, “The dreidel is a game kids play during Hanukkah by spinning a top gambling with chocolate coins.”

Gilberto Barajas has been interested in Judaism for years and recently joined the congregation. This was his first Hanukkah.

“Latkes was what I really wanted to learn how to make but it was not as easy as I thought. I like how festive the food is,” he said.

Barajas expected the latkes to taste like hash browns but explained, “I was really surprised how good they tasted. I could taste the onion and enjoyed the sour cream and apple sauce. I give it a nine out of 10.”

Barajas admitted his favorite dish of the evening was the kugel, which is made with pasta, sour cream and cottage cheese.

Macey made sure to remind everyone, “The other thing that is very important about Hanukkah is lighting candles on the menorah. The lights remind us that we are supposed to be a light in the world and do good things.” Anyone interesting in finding about more about Congregation Beth Jacob may email congregationbethjacob@yahoo.com. 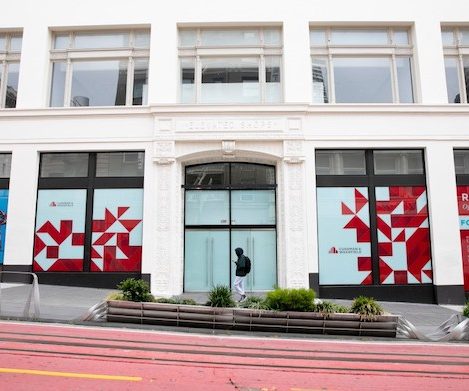