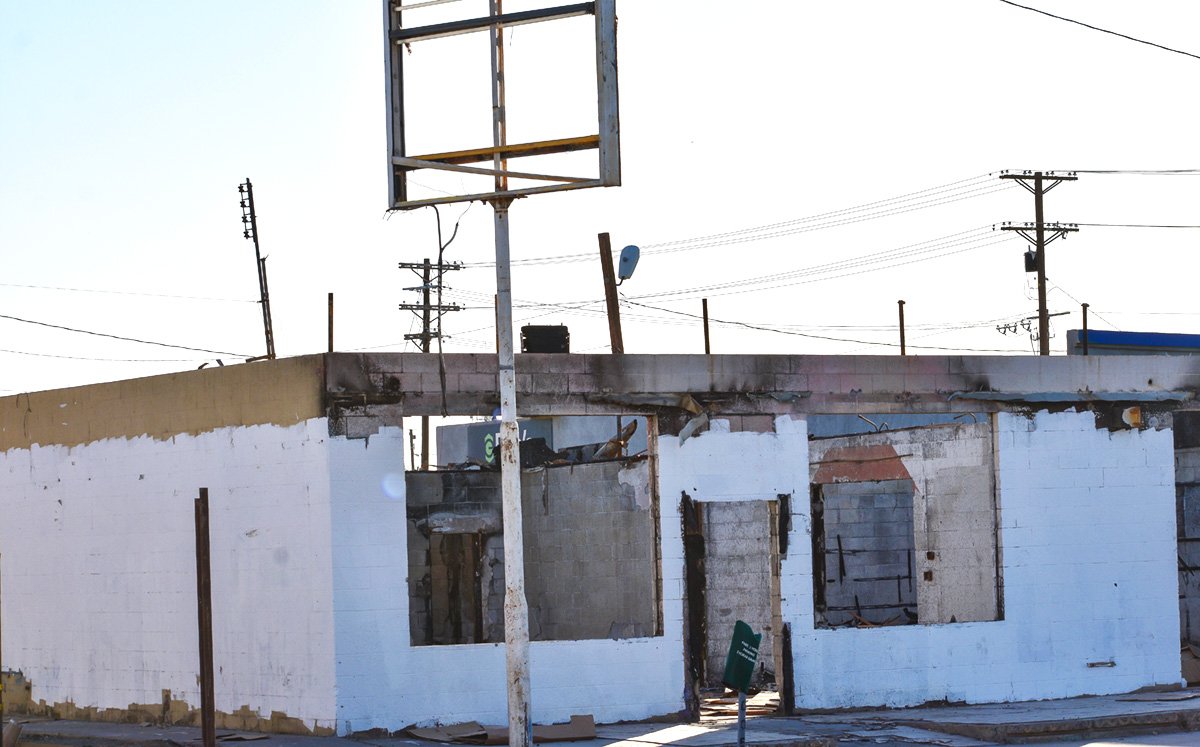 The fire-gutted remains of the former Guadalajara’s restaurant at Third Street and Emerson Avenue in Calexico are among the eyesores the city hopes to remove with a proposed update to its nuisance ordinance. | CORISSA IBARRA PHOTO
Home
Local News
In Local News

CALEXICO — Calexico is planning what appears to be an extensive overhaul of its nuisance-abatement ordinance, according to a report to the city council.

The move would hasten cleanup of “hazardous and unsightly public-nuisance conditions” and cut city costs to achieve that.

The information is in a report to the city council for its Dec. 18 meeting. It was prepared by City Attorney Carlos Campos and contract city planner Christopher Velasco. The meeting was held after this newspaper’s deadline.

The council was expected to consider holding a public hearing and preliminarily approve revising a critical chapter of the city’s nuisance ordinance.

That area defines common nuisances, ensures due process for those cited for violations and allows the city to recover costs to initiate nuisance removals.

Calexico City Manager David Dale said the changes to the ordinance “were not directed at any one particular property” and added in Dec. 13 interview “there are multiple properties in Calexico that could be considered a public nuisance.”

Dale did use as an example the shell of a burned-out building at Third Street between Emerson and Imperial avenues that was the Guadalajara’s restaurant. It has had numerous fires.

While most of the flammable material from the site has been removed by the property owner, Dale noted the block structure has not been razed, implying the ordinance changes would facilitate that.

It is recommended the council repeal a chapter of the ordinance that contains only a limited list of public nuisances and an “overly brief and general recitation of the city’s authority to, and procedures for, abating public nuisances,” according to Campos’ and Velasco’s report.

The chapter as worded does not provide adequate notice to property owners and code enforcement officials on what conditions constitute public nuisances, the report states. Moreover it does not define what due-process protection property owners have available to them during the mitigation process. That increases city liability if it is taken to court over issuing citations and removing public nuisances, the report indicated.

“The lack of clear and uniform procedures for seeking property owners’ compliance and affording property owners due process will continue to mire the city’s efforts to abate dangerous nuisance conditions in an efficient and cost-effective manner,” the report states.

The replacement chapter to the ordinance is intended to create uniform policies and procedures for code enforcement officers and other city officials.  In turn, that would allow nuisances to be removed faster and at less cost. As part of the expanded chapter, a list of common public nuisances would be defined and described so that violators and city enforcers have a clearer picture of what constitutes a nuisance.

Previous
City Seeks to Give Sweeper Driver a Soft Landing

Next
Rise From the Ashes? Santo Tomas May Not be Dead After All
Start typing to see results or hit ESC to close
Calexico Chronicle Imperial County news Calexico News Covid-19 Calexico
See all results
More Stories