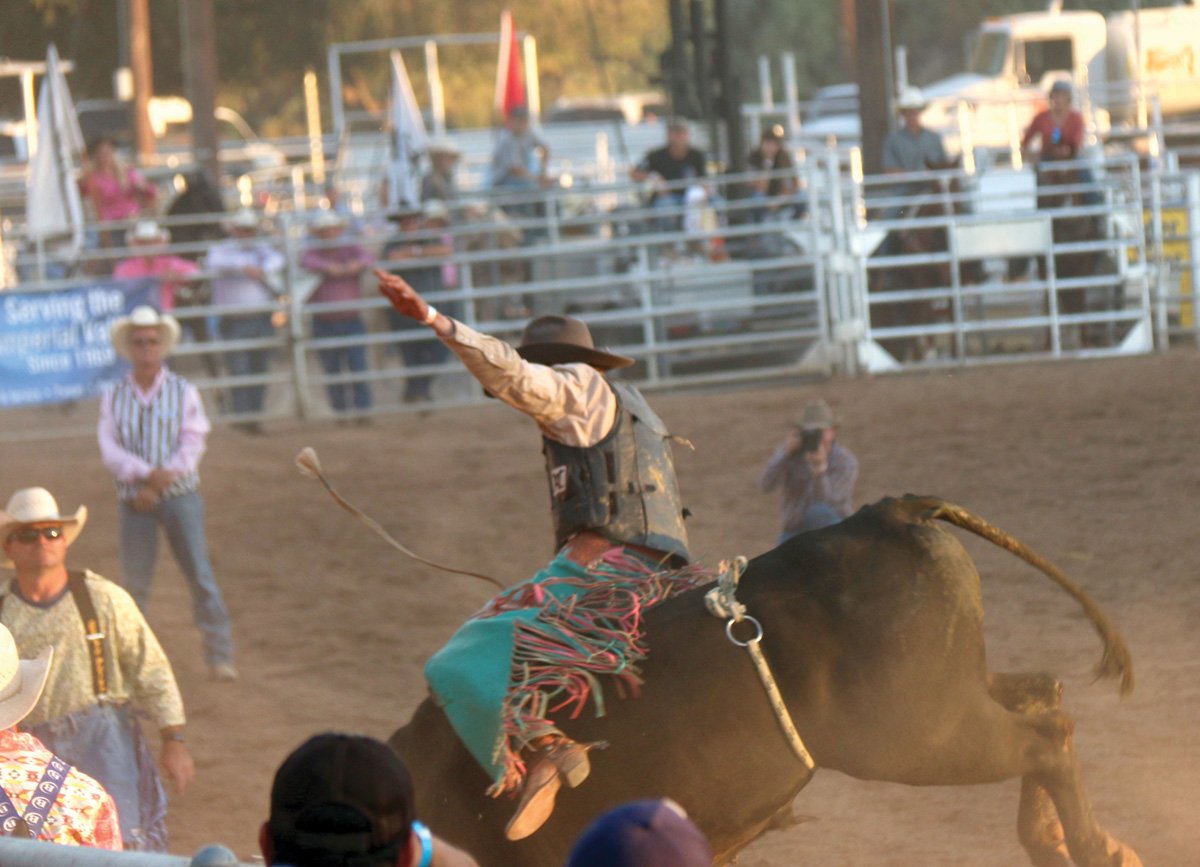 The 2019 Cattle Call Rodeo Saturday matinee on Nov. 9 was a break out start to a weekend of action that saw crowds stampeding back for two more performances to crown the All Around Cowboy who wins the Cattle Call saddle.

The rodeo is some of the best entertainment in Imperial Valley, explained Carson Kalin, Rodeo Committee member.

“It’s an extreme sport,” said Kalin. “It was around long before motorcycles … back in the days of jousting and the knights.”

Today, the rodeo has bronc riders wearing crash helmets and body armor vests to keep them safe to ride another day, he explained. Kicking off the event was the Cowboys’ Wild Horse Race.

Kalin got the rodeo galloping with a blast of his shotgun that signaled the open corral gate letting loose a herd of wild horses. The first to successfully saddle one of the unbroken mounts was Anthony Jauregui.

Besides the Nov. 9 afternoon competition, rodeo events were held in the evening on Nov. 9 and a matinee on Nov. 10.

Wade Michael Brown, 25, is a bronc-riding competitor who grew up in Norco (Riverside County). He competed in junior rodeo, high school and college. He works for a construction company and competes on weekends. He also knows his competitors who form a tight-knit group from California and Arizona.

“I’m just trying to hit as many circuit rodeos as I can,” said Brown. “I’ve done eight rodeos since September. But it’ll get better in the spring with the whole Western U.S. loaded up with rodeos.”

Joseph and Rosetta Ingenito, rodeo fans, arrived from Winterhaven for the second year and this time brought friends, Deborah and Colin Garner of Alberta, Canada. Joseph is originally from New Jersey and calls himself an urban cowboy that kept horses in Jersey City.

“I used to do team penning and barrel racing,” he recalled. “This (Brawley) is a beautiful town, a beautiful setting and a great rodeo. It’s worth riding up for. Even the food, we love the pulled pork.”

Reno Rosser, son of legendary rancher and rodeo-stock provider Cotton Rosser, helps produce Cattle Call though the family’s Flying U Rodeo. Throughout the year the Professional Rodeo Cowboys Association puts on incredible contests all across the United States. The animals featured are bred, raised and provided by firms such as Flying U that depends on Reno, his sister, Cindy, and other family members.

Flying U is based in Marysville about 30 miles north of Sacramento. But Reno explained they love Brawley because it is a much drier climate than the north.

“The history behind this rodeo, that’s so cool. We go to 40 to 50 rodeos a year, but none celebrate rodeo like Brawley does,” he said. “In Salinas it’s a two-week deal but as soon as it’s over nobody talks about it. But here it’s year ‘round.”

He added, “And the other unique part is the nonexclusive sponsorship. You got four tractor companies. Also, the money generated at the rodeo all goes back into the community, the high schools, churches and other civic organizations.”

Randy Corley, award winning announcer, was back for his 20th year. Corley first won announcer of the year in 1984 and then another 11 times, the most recent honor garnered in 2015. Corley praised his crew in the announcer’s booth, including Chuck Lopeman, who runs the sound, and makes him sound better than he normally does, admitted Corley. There’s also Tim Miotke, who runs the scoreboard.

“They’re good natured, even if we get a little unorganized at times but it never gets out of hand,” said Corley.

Bill and Gloria Rohler are regular visitors from Bombay Beach but they missed a couple of years because so many events are scheduled and they cannot get to them all.

“We like it all. The mutton busting (kids roping sheep) are cute and you know they’ll grow up to be cowboys and cowgirls,” said Rohler.