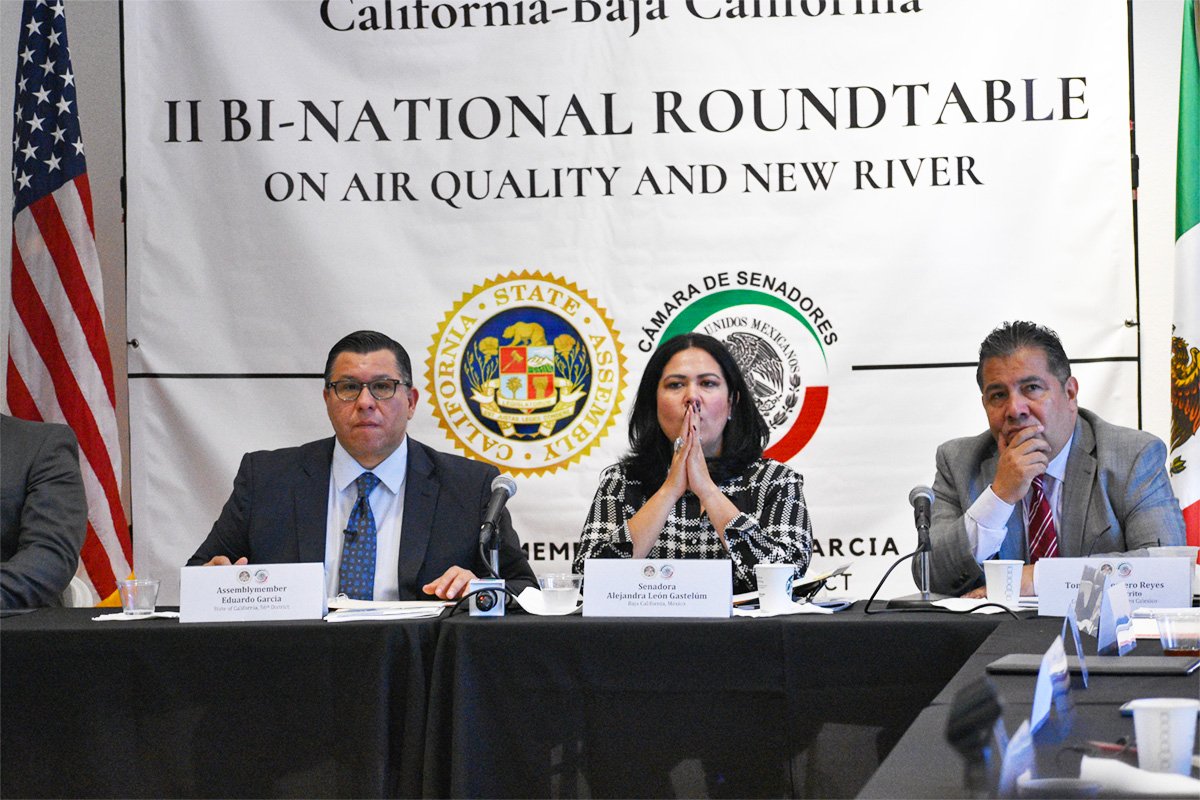 Although the county has been mostly supportive of Calexico’s plan to pipe the fetid waters of the New River until they pass city limits, county Board of Supervisors Chairman Ryan Kelley is criticizing the project.

The decision puts the problems of the toxic river “out of sight, out of mind,” Kelley said during a recent interview.

The New River, for years cited as the filthiest body of water in North America, originates in Mexico where it accumulates pollutants such as known carcinogens and raw sewage, and crosses the international border in Calexico. The river makes its way through the Imperial Valley before emptying into the Salton Sea north of Brawley.

Several days before Kelley and his fellow board members unanimously voted to declare a local state of emergency over repeated raw-sewage spills into the river, Kelley spoke with this newspaper Oct. 29 about several issues regarding the heavily polluted waterway.

To put his comments about Calexico into context, Kelley seemed exasperated when discussing plans by state Assembly Member Eduardo Garcia (D-Coachella) and state Sen. Ben Hueso (D-Chula Vista).The duo has similar ideas in forming bi-national coalitions to take their concerns over the New River directly to officials in Mexico City and Washington, D.C. Kelley seemed to grow more frustrated when asked whether he would participate.

“We will go to these meetings and vent, but it hasn’t gotten us anywhere,” Kelley said. “We’re tired of being the forgotten stepchild.”

Part of the county board’s action Nov. 5 in declaring a state of emergency was to push the federal government and the U.S. side of the International Boundary and Water Commission to pressure Mexico and its IBWC counterpart. The move seek to have those agencies deal with the raw sewage being dumped into the New River during an increasing number of breakdowns at Mexicali’s failing wastewater treatment plants.

During an Oct. 24 meeting of the IBWC’s Colorado River Citizens’ Forum in Calexico, in front of U.S. Commissioner Jayne Harkins, two Imperial County Public Health Department officials laid out the county’s concerns. They focused on pollution levels at the New River and made several demands of the government, including a call for the feds to fund an $80 million to $100 million sewer plant on the Calexico side of the river.

Already irked by what he said is a lack of action and too much talk on the part of federal and state officials in addressing pollution at the river, Kelley was then asked in the interview how building a sewer plant in Calexico would co-exist or where it might be built relative to the Calexico New River Improvement Project.

The project, which includes recreation areas along the river, when fully funded and finished would have its own water-treatment component before the river gets encased in a pipe until it flows past city limits.

He added, “The Calexico New River project puts the river out of sight, out of mind,” he added, clearly implying that Calexico’s plan does not deal with the pollution problem so much as put a Band-Aid on it until it’s out of Calexico’s jurisdiction.

Kelley said the county board is responsible for the health and well-being of all the county’s residents who live along the path of the New River. That includes those communities north of Calexico such as Seeley, parts of Imperial and Brawley and southwest of Calipatria.

“We’re not afraid of making people upset for projects they may not do,” Kelley said at one point, seeming to refer to the fact that the city’s improvement project has been 15 years in the making and has yet to be completely funded. Calexico officials have said they still need $15 million to $25 million to have the multi-phase project paid for in full.

Undergrounding New River ‘Not the Fix’

Jeff Lamoure, deputy director of the county Public Health Department’s Division of Environmental Health, agreed with Kelley. Lamoure is who made the request for federal funding for a wastewater treatment plant during the Oct. 24 IBWC meeting.

Lamoure also leads the county’s new “water desk,” a water-quality-monitoring program being developed by the county that initially was to test the quality of the Salton Sea. However, Lamoure and the county want to add testing New River water-quality to its responsibilities.

“Just to pipe it underground and move it farther down is not the solution,” Lamoure said during an interview with this newspaper Nov. 3. “It’s not the fix.”

Calexico officials had varying degrees of reaction to what Kelley had to say. Fellow board member and Division 1 Supervisor Jesus Escobar, who was sworn into office in January, vacated his Calexico City Council seat to take a place on the county board. As such, he has seen the issue from both sides.

“I have not heard any negativity” from Kelley, Escobar said Oct. 31. “These are two separate matters. I think (the Calexico New River Improvement Project) is more of a short-term solution and (a full sewer plant in Calexico) is a long-term solution, and they both make a heck of a lot of sense to me.”

Perhaps no one knows more about the Calexico New River Improvement Project than Assistant Calexico City Manager Miguel Figueroa. He has been working on the project for several years, helping to guide it through nearly every stage and sorting through many of the funding successes and setbacks.

Figueroa was a key figure in gaining the support of the county board and the Imperial Irrigation District Board of Directors in establishing a three-way memorandum of understanding to fund the operation and maintenance of the Calexico project.

The MOU saw the county, IID and the city of Calexico each agree to pony up $50,000 a year once the project is finished. It was a requirement of the California Environmental Protection Agency and the state Water Resources Control Board to move forward with awarding a $1.4 million contract for an environmental review of the project in October 2017.

“The passion that Mr. Kelley has is welcomed because he is challenging federal agencies to step up and do their part. He is in his own right speaking and looking out for Imperial County, and that should be applauded,” Figueroa said during an interview with this newspaper Oct. 30.

Added Calexico Mayor Bill Hodge: “Those swipes, we can’t take them personally. The city has a plan. … We have made strides at this juncture more than we ever have in all these years the New River has been talked about.

“I don’t think he’s correct on that. … I think he has a misperception of what we’re doing,” Hodge explained during a Nov. 3 interview. “We have always said it’s not just a Calexico problem, it’s an Imperial Valley problem.”

Most recently, the city was on the verge of finally being able to move some dirt on the New River parkway project when the city council went out to bid for a construction company for the first phase. Unfortunately, the council was asked to reject the bids in September when they came back $700,000 and more above the available funding.

The city had $2 million set aside for work that included the first three-quarters of a mile of bicycle path/pedestrian walkway along a portion of the river. Also included was landscaping, electrical work, site preparation, erosion control measures and stormwater/water-quality improvements, according to the original bid.

But the only qualified bids the city received over the summer were from Pyramid Construction and Aggregate Inc. for $2.7 million and Granite Construction Co. for $3.2 million.

Figueroa said the city is still revising the request for proposals, doing away with certain components to lower the bids the city receives. He did not say when the bidding process would start again, nor would he say what is being changed from the original plans.

Meanwhile, Figueroa has said the city needs between $15 million and $25 million for the final phase of construction, which is the portion that would complete the major work on the project, including a trash-screen system to collect the big items that flow through the border from Mexico.

There would be a tertiary pump-back system, which is an extension of the city’s wastewater treatment plant, and is meant to take some of the polluted water, clean it up and deposit it into a riverbed so that a stream is part of the parkway features. Finally, the primary flow of the polluted river would travel in an underground pipe, before spilling out of the pipe where it ends north of Highway 98.

Assembly Member Garcia said Oct. 25 that he plans to author and introduce a new bill in January for a water bond that specifically earmarks around $15 million to $20 million for the final piece of funding for the Calexico project. Tentatively named the “Climate Resiliency Bond,” Garcia said the legislation, if approved, would see the money become available to Calexico sometime in 2021.

So far, it has been a long and winding journey for the Calexico New River Improvement Project, Figueroa conceded on Oct. 30.

Formed in 2004, the Calexico New River Committee was established with the goal of being “the first organized effort to address the historical, environmental problems posed by the New River. This was done through a unified and inclusive approach that considered the collaboration of members of the community that had been affected for decades in Calexico, specifically the westside residents,” Figueroa said.

With the support of local governments and constant communication with state and federal officials, former Assembly Member V. Manuel Perez (D-Coachella) in 2009 introduced Assembly Bill 1079, which was supported by the Calexico New River Committee. The bill created a strategic plan to address ongoing issues with air quality and water quality with the New River and the Salton Sea.

In 2011, the New River Improvement Strategic Plan was adopted by the California-Mexico Border Relations Council.

“Community meetings were put together to showcase elements of the plan, and consensus was reached as to what remediation and improvement projects were needed in Mexicali and Imperial County,” Figueroa recalled.

Prior to that, in the early 2000s, Figueroa said former U.S. Rep. Bob Filner (D-Chula Vista) secured funding from the U.S. Department of Transportation for a parkway project that would include bike paths and pedestrian walkways along the river. Filner was able to get the project $3.2 million, but it required a 20 percent match, which was $800,000.

The matching funds didn’t materialize until the passage of AB 1079, when the $800,000 came by way of the California Natural Resources Agency.

Some $2 million of the $4 million Filner secured went to environmental studies and the design phase of the parkway project. The remaining $2 million is what is funding the first phase of construction plans the city is currently revising so it can re-bid the project.

Meanwhile, the city has the first $10 million set aside for the trash screen, pump-back system and underground piping, which it received through the state 2018 Parks and Water Bond Act (Proposition 68).

“We welcome the latest efforts by Mr. Garcia to secure the additional funding we need to complete the infrastructure projects identified by the New River Strategic Plan for Calexico,” Figueroa said. “We will continue to partner and work, as we have since 2004, in an organized, strategic manner with local partners, elected officials and our neighbors south of the border.” 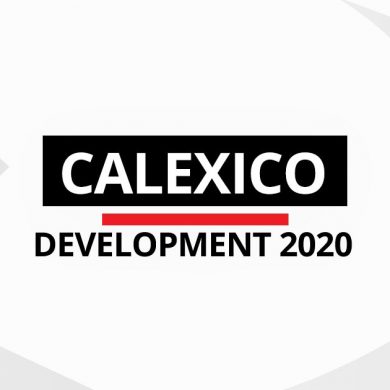