A pair of key city ordinances on taxicab and swap meet regulations were scheduled for final approval at the Sept. 18 Calexico City Council meeting. If approved, each would go into effect in 30 days. The meeting was held after this newspaper’s deadline. During the council’s Sept. 4 meeting both ordinances were preliminarily approved by unanimous vote with little comment from the public or council members. The taxi ordinance is being updated to coincide with state legislation that took effect Jan. 1. The state goal is more stringent regulation with provisions that allow for cab companies to be more competitive against ride-hailing services such as Uber and Lyft. Calexico Taxi Co. owner Erik Ortega, who is also an Imperial Irrigation District director, said he is pleased with the way Calexico’s new ordinance came out. He said it will provide “teeth” against the operators and users of illegal taxi services, as well as allowing companies to utilize new metering technologies. Although Ortega admitted Uber and Lyft haven’t really caught on locally and don’t operate consistently outside of the weekends, he said the main benefit of the new ordinance would be penalizing the illegal taxis and their users. “We direly need the help out there” against “raiteros,” Ortega said during a Sept. 10 interview. “These folks are eating our lunch.” Ortega added illegal and unlicensed taxi services have cut into his revenues over the last five years by up to 40 percent. Under Calexico’s new ordinance, the city’s police department would be able to fine unlicensed operators $1,000 and their users $100-$500 depending on the number of violations in a year. The new ordinance would also allow taxis to operate outside their base city without the need for a license in another city in certain instances, Ortega added. The taxi ordinance is considered an important element in Calexico’s plan to revitalize its downtown. Cabs would be required wait for riders on First Street between Rockwood and Heffernan avenues, a move from the current location on Rockwood. Ortega praised the move saying it would put taxis closer to their riders who come from Mexicali through the downtown port of entry. Other ordinance requirements would include the creation of a series of licenses and permits to run a taxi service in the city. The moves would range from requiring an overall operating certificate for each cab company to a series of individual permits and certifications for each cab and driver. In addition, a company could be fined $1,000 for failure to obtain or maintain those permits and certificates. Swap Meet Ordinance The amended swap meet ordinance details the steps and approvals a prospective swap-meet proprietor must go through to get licensed by the city. It includes an application process with intensive investigation and inspection by the city police, fire and building/planning departments. Each swap-meet operator’s license would be good for one year. Upon renewal for year two the complete application and inspection process for new licenses must be repeated. In year three and beyond, no such application would be needed but annual inspections still required. The remainder of the measure is expansion of the requirements and conditions for licensing, including entries on expiration and renewal, suspension and revocation, and appeals and reapplication processes. The ordinance contains a list of “minimum standards,” where the meat of the rules and regulations reside, and conditions affecting public safety are detailed. The ordinance includes detailed regulations on how goods left on site by vendors must be stored. The update of the swap meet regulations came in the wake of a December 2018 fire that severely damaged the now-closed Santo Tomas Swap meet. Post-fire inspections revealed a multitude of alleged violations of fire and building codes. The cause of the blaze was found to be a faulty electrical outlet that ignited goods stored in a vendor booth. Santo Tomas operators ultimately decided to close the outdoor marketplace rather than make required repairs and comply with the proposed new regulations. The neighboring Las Palmas swap meet has also been found to have alleged code violations but its operators have said they will make required repairs and comply with the new ordinance. 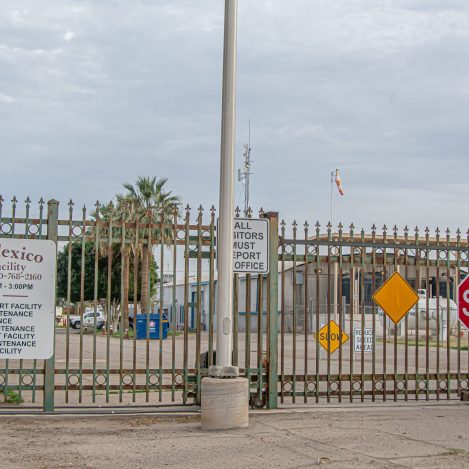